400: Eliot Coleman on 30th Anniversary of ‘The New Organic Grower’.

Being a resource for organic growers for over three decades. 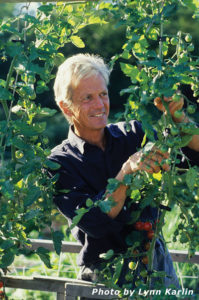 Eliot has over fifty years’ experience in all aspects of organic farming, including field vegetables, greenhouse vegetables, rotational grazing of cattle and sheep, and range poultry. He is the author of The New Organic Grower, Four-Season Harvest,The Winter Harvest Handbook and an instructional workshop DVD called Year-Round Vegetable Production with Eliot Coleman – all published through our friends at Chelsea Green.

In 1988, Eliot Coleman literally wrote the book on being an organic grower and has been an invaluable resource for organic gardeners and farmers for three decades. He only started growing food because it sounded like an adventure; and he learned how through books and making friends with farmers around the world. We learn who inspired and taught him, how he uses livestock on his farm, how he virtually moved his farm 500 miles to the south for the winter, and more.

“We were not breaking any of the laws of horticulture!”

“Making sure that you are nurturing all of those powers that the earth has given for free, and directing them through natural techniques to make the soil more productive than it would be on its own.”

The New Organic Grower: A Master’s Manual of Tools and Techniques for the Home and Market Gardener, 2nd edition

The New Organic Grower: A Master’s Manual of Tools and Techniques for the Home and Market Gardener, 30th Anniversary Edition

Make friends with your land: A chemist looks at organiculture  – Leonard Wickenden

How to reach Eliot: