From green lawns to green vegetables. 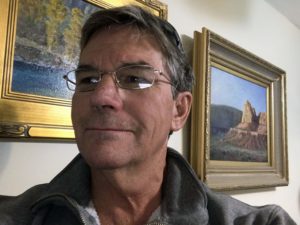 John has been working on golf courses for over 35 since the age of 16. He planted thousands of trees and just for fun, would typically have an organic vegetable garden on the golf course for the enjoyment of customers and staff.  Along the way he earned a Bachelor of Science degree from Utah State University in Horticulture.

In 2013 his wife and daughters developed digestive issues. Because of this he started growing his own vegetables, built a compost pile, implemented no dig methods, planted for pollinators, introduced beneficial predator insects, and so on.

Soon he was giving vegetables to his neighbors and he had become an urban farmer.  In 2018 he named his micro farm ‘Straw Hat’, rented a booth at a Farmers Market and started selling organic produce.  The success was beyond his expectations, incredibly rewarding and now he is planning on retiring from the golf course and going into urban farming full time.

As his wife and youngest daughter began struggling with celiac disease, John Brubaker believed that the pesticides used on vegetables were perhaps weakening their immune systems. This was his entry into organic urban farming. He began small with 20 beds and has been expanding ever since. John is growing numerous crops in his small space, including artichokes and cantaloupe for home, and kale, spinach, beets, radishes and glass gem corn for the Farmers Market. He is finding great success with his natural farming.

“I will try to grow what people want and try to grow it the best I can, and make it regenerative and sustainable.”

“I have people who refer to me as their go-to farmer.”

His failure – I seem to struggle delivering the message about micro-farming, composting and using organic inputs only

His success – My daughters. I don’t know what I would do without them!

His drive – Knowing that there are hungry people in this country. We’ve got to work on our systems.

How to reach John: