Creating resilience in an urban community.

It was after spending some time out of the country that Francey Slater woke to the poor American relationship with food.  This motivated her towards food justice and making a difference in her community.  With a belief that healthy food is a right for everyone, she co-founded a non-profit that is creating community and school gardens, and building a stronger, resilient community as a result. 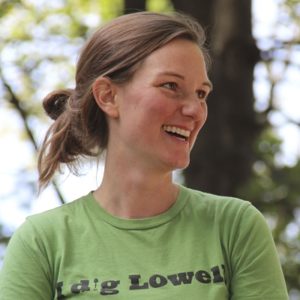 Francey is the Co-Founder and Executive Director of Mill City Grows in Lowell, MA. Her experience creating garden-based educational programming spans two decades, several continents, and youth through adult learners.
Mill City Grows is an organization that fosters food justice by improving physical health, economic independence and environmental sustainability in Lowell through increased access to land, locally-grown food and education.
Prior to founding Mill City Grows, she was the Education Director for CitySprouts, worked as a member of the Urban Nutrition Initiative in Philadelphia, PA, helped to restore agricultural efforts in a village school in Bangalore, India; and provided education for farmers, gardeners, and youth in Hocotepec, Mexico.

Her drive – Being part of something bigger than my self

Her advice – Dig in, grow something, and share it

The Omnivore’s Dilemma: A Natural History of Four Meals

Whatever It Takes: Geoffrey Canada’s Quest to Change Harlem and America

How to reach Francey

Special thanks to our sponsor:

gemplers.com/urbanfarm
(use code URBANFARM01 to save!!)

Join us for chats about gardening topics with Special Guests each month. Live Q&A to assist with your questions
Sign up for the series!
Categories: Community, Education and Learning, Garden Based Education, Health, podcast, Regenerative or Sustainable, Social Justice, Support systemsBy JanisAugust 10, 2019Leave a comment
Tags: accessagagriculturecommunityeconomiceducationenvironmentfarmfarmersfoodFranceyGardensgreggrowshealthindependencejusticelandlearnlocally-grownLowellMillCityGrowsPetersonresilienceSlaterurbanyouth