Working to Protect the Land That Produces Our Food.

Leon Kolankiewicz defines the problem of urban sprawl, and he describes the alarming rate at which it is permanently destroying farmland and our future food security.   What is driving this sprawl, and what can we do about it?  Leon is optimistic that farmland can be saved if long term trends are addressed.  Hear the solutions he recommends, based on his decades of research, and the changes he believes can be made at both the individual and government levels. 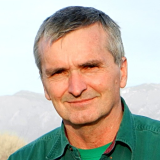 Leon is a consulting environmental scientist and planner. He has managed Environmental Impact Statements (EIS’s) on projects ranging from dams and reservoirs to flood control facilities, roads, parks, power plants, oil drilling, and mines. He has assisted the U.S. Fish and Wildlife Service in the preparation of management plans at 50 national wildlife refuges in many states. Receiving his B.S. at Virginia Tech and M.Sc. at the University of British Columbia, during his career he has worked for several agencies including the U.S. Fish and Wildlife Service, Alaska Department of Environmental Conservation, National Marine Fisheries Service, as a Peace Corps Volunteer in Honduras, and as a consultant.

His failure – Feeling like he wasn’t able to influence his own family with his activism.

His success –  Seeing an article in National Geographic, about wildlife conservation corridors in Central America, that showed the natural park whose boundaries he had helped establish.

His drive – The opportunity to feel like he is contributing to environmental sustainability.

His advice – “With a little curiosity, there is never a dull moment.”

Population Growth and the Diminishing Natural State of Arizona

Dirt:  The Erosion of Civilizations by David R. Montgomery

How to Reach Leon:

You can send an email to Leon at podcast@urbanfarm.org and it will be forwarded to him.

*Disclosure:
Some of the links in this post are affiliate links and if you go through them to make a purchase, we will earn a nominal commission at no cost to you. We offer links to items recommended by our podcast guest as a service to our audience and these items are not selected because of the commission we receive from your purchases. The decision is yours, and whether you decide to buy something is completely up to you.