Listen to his podcast at HERE

October of 2014 at a conference dinner reception it was suggested from a group of people that I should teach what I know about soil health to the gardening community. The next morning while passing by an old friend at breakfast, who just happened to be a product launch expert, I shared the idea with him. He ordered me to drop everything, go back to my room (which I had to drive to as I wasn’t staying where the conference was being held) and see if TableTopFarmer.com was available, report back to him as he wanted to help with the project.

My friend Kurt’s idea was to container garden and start out with soil from one of my longest no till farm fields. After multiple attempts to corral the soil profile intact we brought it inside and tried to continue on with the soil health. Not having any experience with container gardening, I am a soil expert and have seeded crops outdoors for over 40 years, but indoor container gardening was a whole new game. So everything I tried using the field soil seemed to have issues.
So at this point the research began to determine how to container garden. I was looking for methods that were being practiced and to adapt soil health building systems to them. That’s when I came across Amie Hall with Square Foot Gardening. From there I was able to develop systems and test them with different growing plants.

Beginning to get results

The first ah-ha moment was when I was growing parsley in a container. Containers 5 & 6 were both blended with the same media, I was getting plants from the herb section in a local grocery store that were moist and packed in soil that were intended for kitchen use. I tested prior to make sure they would keep growing, I used them to jump start the process rather than growing from seed and taking an extra 2-3 weeks. Container 5 I left it as I had formulated the media mix with traditional practices and let them grow. Container 6 I introduced two principles of building soil health at about 3 weeks of growth. Within a short period of time of doing that the parsley in container 6 began to grow richer fuller and better color.  The plants grew taller, after a while they became darker color and more leaves, the stems of the plants had better density than container 5. 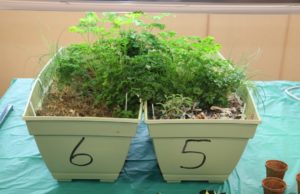 Moving the experiment outside

So then in the spring of 2015 I wanted to take the same test outside to see if I could duplicate the system I developed indoors. By then I had lots of ideas and was working with a compost company from North Dakota that was making compost from aged Bison manure. I bought several transplants from a couple different sources and tried to pick out 2 to 4 plants that were uniform in growth of the same plant type.
I mixed up a media mix that would be enough for two raised beds that I had been working with. The bed on the left I used miracle grow fertilizer and blended it with the media mix. The bed on the right I used an all-natural fertilizer product that I make of worm castings that’s called super soil. The bed on the left I used all traditional raised bed gardening practices. The one on the right I did not till utilizing several principles of no till just like what I practice on a large scale on my production farm.

The results again were phenomenal; the difference between the traditional bed on the left and the bed on the right practicing soil health principles was unbelievable. By now I knew that I could teach others to duplicate a simple system to restore and maintain soil health on a small scale to garden in. What you don’t know is that it became a very hot summer and fall. And where these two beds were located it was like they were in an oven. Plants under stress fail not only because of adequate moisture but equally because of poor soil health. 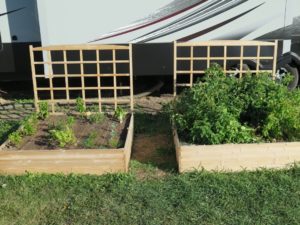 For more info log on to https://tabletopfarmer.com  go to the blog page and click the button on the right side, it will take you to a free report on the “5 Simple Steps To Creating Nutrient Rich Soil”
I look forward to sharing more information on the 5 soil health principles. 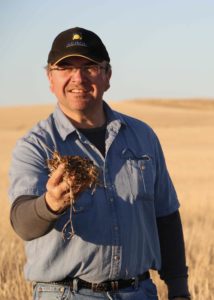 Steve Szudera is a third-generation farmer from western North Dakota with over 35 years of no-till farming experience building and maintaining soil health. After realizing that the standard farming practices done before he took over were the cause of the wind and water erosion, and that the soil was depleted of moisture and nutrients, he converted to no-till farming.  He learned very quickly that just one simple practice of not disturbing the soil would allow it to rebuild and recover.
He now teaches others how to rebuild and protect the natural commodity of their own soil so that they too can become stewards.
Website: tabletopfarmer.com
Email: Steves@tabletopfarmer.com