670: Puja and Udgar Parsons on Growing a Green Business.

Creating a sustainable greenhouse business in the 90’s.

This week we have a very special series of five daily episodes of the Urban Farm Podcast sharing the work of Growing Spaces, a company whose vision is to provide year-round growing solutions for your own food, no matter the weather.  We start the week by hearing from the founders of the company, then we have three episodes from people just like you that are using Growing Domes to grow food for their community, and we wrap up the week hearing the vision of the new owners.  We really encourage you to listen to this incredible content, then check out their website at GrowingSpaces.com/urbanfarm.

In the first of five episodes, we hear from Puja and Udgar Parsons, the founders of Growing Spaces.  They give us a peek inside their geodesic dome greenhouse kits, detailing how they work and describing the features that improve upon a traditional greenhouse.  Udgar explains how the dome’s shape is an extension of his permaculture principles and love of nature, and Puja inspires us with stories of their determination to share the joy of healthy, garden-fresh vegetables year-round with as many people as possible, despite the growing pains they experienced as entrepreneurs.

Don’t Miss an Episode!!
Click HERE to learn how you can gain access to the entire Urban Farm Podcast library (all 650+ episodes!) by becoming an Urban Farm Patron. 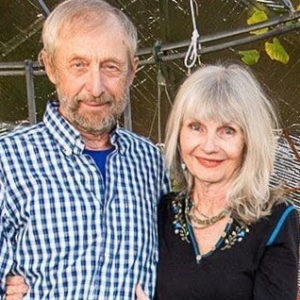 Udgar Parsons was born and bred in Yorkshire England in the early forties while Puja Parsons was raised in Burbank, California. Udgar left a career in dentistry and orthodontics to raise a family on a farm in the North of Scotland. There, he learned to live off the grid and lead a healthy lifestyle. Puja’s degrees are in Psychology, Philosophy, and Fine Arts, and that led her to create several non-profits for the promotion of holistic health and spiritual growth.

After traveling the world together and participating in several intentional communities, Udgar decided to become an American citizen and they moved to Colorado. There, in the Roaring Fork Valley, he was inspired by the vision of Buckminster Fuller and John Denver at Windstar, where he experimented with Bucky’s Biodomes.

In 1989 they founded their own company called Growing Spaces, after developing Udgar’s own greenhouse model called the Growing Dome. Puja held that businesses could offer solutions for environmental degradation and promote nutrition and natural medicine based on fresh food and organic gardening for clients and a socially responsible business culture. Together they grew the company as social entrepreneurs for 29 years before passing it on to Liz and Lem Tingley in 2018.

This is episode 1 of a 5 part series.  Don’t miss episode 2 tomorrow!

Her drive – Reverence for life

His advice – “Do what you love and the money will follow.”

The Diamond Cutter: The Buddha on Managing Your Business and Your Life  by Geshe Michael Roach and Lama Christie McNally

How to reach Puja and Udgar:

Join us tomorrow for the second episode in this special series, where we talk to Eric Andrews who is using a Growing Spaces growing dome to grow food in community gardens in Detroit.