Can there be too much organic matter in your garden?

Growing a healthy garden requires a good balance of healthy soil. Mykl Nelson had studied agriculture for several years and conducted soil analyses of multiple organic farms. What he discovered was a shocking truth about soil health. Listen in to learn about what is over-enrichment, acknowledging diverse soil conditions, and Mykl’s unbelievable solution that turns food waste back into high quality protein. 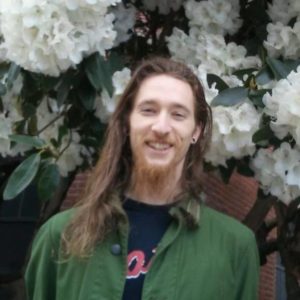 Mykl grew up in a military family and has been stationed around the world. The longest he’s lived anywhere was six years in Colorado and six years in Oregon. His paternal grandparents were commodity farmers in Wyoming who ‘hoped their kids would be too smart to become farmers.’ Of their four children and nine grandchildren, Mykl is the only one in agriculture. Mykl is an instructor of urban agriculture at Oregon State University, and is pursuing research into controlled environment agriculture. He has clusters of houseplants from different biomes on his windows sills, worms in the garage, and he’s experimenting with insect protein production. It seems if there’s a living system to be emulated, Mykl is interested.

His failure – Failed to appreciate what he had until it was gone
His success – Finding a field that allowed him to do meaningful research
His drive – Gardening felt like a groove that fit into place
His advice – “Write things down. Make a plan. Turn that plan into action.”

Join us for chats about gardening topics with Special Guests each month. Live Q&A to assist with your questions
Sign up for the series!
Categories: Composting, Education and Learning, Garden Based Education, Gardening Basics, Greenhouse or Hoophouse, podcast, Prepping, Regenerative or Sustainable, Soil SearchingBy KathrynSeptember 1, 2020Leave a comment
Tags: balancebiologicalcompostenrichmentfarmgreenhousegreghealthyinsectmattermyklnaturalnelsonnitrogenorganicPetersonphosphorusproteinsoilurban