by Janis Norton
of The Urban Farm

What happens when you experiment in your yard? For me and my Two Peace in a Pod Urban Farm, it is an amazing bonus crop of pumpkins, squash, watermelons, sunflowers, and onions! 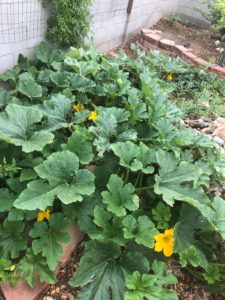 A surprise melon and squash patch in the garden

For last several seasons, I have not been ready to do any serious new garden work since I was busy with work, and as a result I had been composting in a truly lazy manner for more than a year.  The house rule was “if it was compostable, it went on the pile”.  But the composting tasks of turning, aerating, managing layers, and watching temps were not on my to-do list.  I am completely acknowledging that I avoided most of the steps I knew to take for proper composting.  It came down to priorities and the compost pile did not make the list.
Even so, my lazy compost pile was going great for a while until I just got too busy to dedicate any energy at all and I quit adding anything to the heap.  After a season of ignoring the pile almost completely, I decided I wanted that space for a something a little more attractive and picked up a couple flowering vines and a mulberry bush to revitalize and brighten that side of my yard. It was the section my husband stared at while barbecuing, and the reason the kitchen window blinds were staying mostly closed.  My garden buddy and I spent a weekend clearing out the pile and prepping the soil for the new plants.

Out with the old?

Clearing the 20 ft section was a challenge because part of it was a huge pile of rocks and small boulders we had pulled from the rest of the yard.  I’m not sure why that spot got picked as the new home for rocks and such, but after a long summer of projects on our still developing orchard/garden we definitely had a nice collection growing.  And honestly, the growing pile of rocks was not going to have any other purpose but be a home for scorpions if I left it, so turning it into a productive section of the yard was on my to-do list for some time.
A few feet away was the semi-forgotten compost pile.  I did not expect to have much good compost as we dug in to clear it out. But every shovel of material was culled and sifted, and we had three piles when were were done – the rocks, the compost, and mulch needing more decomposition.  The results were amazing!  After moving way more rocks than I realized we had gathered, I was not very surprised to have more rocks than mulch, and very surprised and the amount of compost. I think we sifted out more than 10 five-gallon buckets of compost and then I ran out of buckets! This rich compost was used around the new plants and then deposited all over the yard in the next few days. 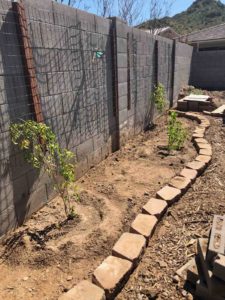 After the clean up and before the surprises showed up

The gift that keeps on giving

And yet the surprises kept coming.  Little did I realize that I had viable seeds in the compost, and several kinds for that matter.  I figure by not letting the pile get hot like normal composting methods, the seeds never got cooked.  So now in several sections of the yard I have volunteers!  I have welcomed volunteer plants in almost every season since I started planting and only once have I been disappointed. This time I have a beautiful large patch of multiple kinds of squash near the new vines and mulberry bush we planted.  I am confident I will get at least a dozen pumpkin, several squash of yet to be determined variety, and I already have half a dozen watermelons starting – all in the 10 ft section of the former compost pile alone. 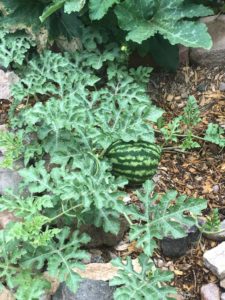 Volunteer watermelon cruising out of the old compost area

Not too far off from that section I found a volunteer patch of onions growing. I think these might have been tossed from a fridge cleaning, I’m not really sure. I’ve never grown these before so I’m calling in my buddy to help me harvest them; after all, it was his homegrown onion that started my urban farming adventure, so it seems perfect to ask him to come to my first onion harvest. 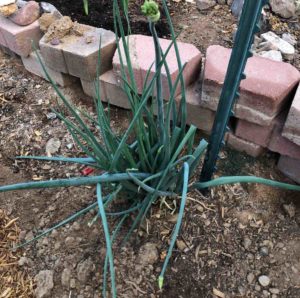 Volunteer onions that showed up near the grape trellis

I also have volunteer sunflowers popping up in strange places, and the walkway outside my bedroom door is no exception. I had tried to plant some a year ago, but none took and I would have to admit that my watering schedule for the sunflower patch was erratic. This year, the rains have helped tremendously.  So I have made a detour in my walking path so that I can protect this new sunflower patch. My philosophy is it is only a weed if I don’t like it, I have very few weeds in my yard. Weeds are not a big problem since only a few plants manage to take root in the wood chips anyway.  My garden buddy shakes his head at me with this let it grow philosophy but this year I have noticed many more volunteers in his yard that were allowed to stay. 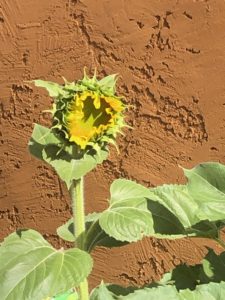 In the orchard I used the compost in several places, and I am delighted to have a few more volunteers – but the strongest and most beautiful is a large Delicata squash patch under my Desert Gold peach.  This part of the orchard was the section that I did not have sweet potatoes in last year, and it was just woody mulch under the trees.  I’m sad to say the trees here did not fare nearly as well as those in another section which had a full blanket of sweet potatoes – I had to replace most of the non-blanketed trees.  So, this year I was planning on green mulch under every tree.  I just honestly thought it was going to be cowpeas, not squash. 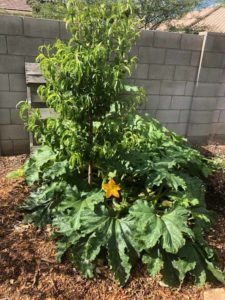 Having started my gardening career here in the Southwest, I am familiar with the Three Sisters concept of companion planting, but that usually involve corn, squash and beans.  I am a little curious to see if there is going to be a competition between the thirsty squash and the two-year old* peach tree for nutrients, so I am going to monitor the soil for moisture and stay current with the fertilizing. I will also add some beans this weekend to the areas that the cow peas did not take. 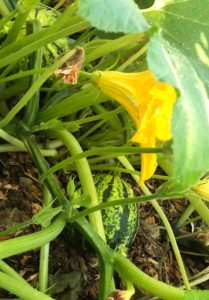 Peeking into the delicata patch and spotting a couple beautiful gourds

The party invitation is out

This morning the wood chips were dark from the overnight rain, and the multiple canopy layers of vibrant green leaves glistened with clinging rain drops. The uncharacteristically cooler temps for the southwest desert in May were welcomed by a chorus of chirps and tweets all around me.  I was in my own oasis. The bees are loving the squash and pumpkin vines, and they swirled in a dance around my head while I peeked in the hidden areas of the patches to see what they had created! My other flowers all over the yard were getting ignored so the message of the dance was clear – the volunteer vine patches all over the yard are the party zones this season.
This Spring in Phoenix is unusual, but as with nature’s normal tendency to adapt despite us, my yard is adapting despite me as well, and I am accepting the surprise gifts with absolute delight!

(*I count my trees’ ages from the date they were planted.)

Janis is a graduate of the Arizona State University, School of Sustainability, earning her BS in Sustainability. After graduating, she used her organization and project management skills to help facilitate a couple of The Urban Farm larger events. From that point on, she has been an active part of The Urban Farm team. She brings her enthusiasm and cheerful attitude to all her projects especially the Annual Fruit Tree Program and The Urban Farm Podcast, as well as sister projects like the Great American Seed-Up, and all the partner projects with GrowPHX.
Email: janis@urbanfarm.org