Farming with an eye on the future. 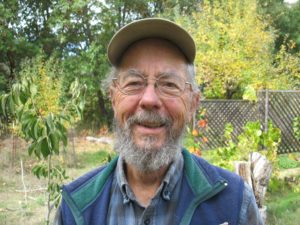 After twenty years in academia, Michael became a farmer. He started in southern Maryland, then moved to Willits, California, where he, his wife, and oldest daughter operate Green Uprising Farm.  He is a co-founder, board member, and teacher at the School of Adaptive Agriculture (formerly known as the Grange Farm School), a farmer training and education program.

Michael has helped create and manage a community kitchen and small farmers group, manage the local farmers market, and has served as both vice president of the Mendocino County Farmers Market Association & president of Little Lake Grange.  And with all that, he found time to write Farming for the Long Haul Published by our friends at Chelsea Green.

As a child Michael Foley visited a Montana ranch and dreamed of being a gentleman farmer one day.  His path however, took him into academia. After being estranged from the land for several years he eventually found his way back to farming. Today Michael, along with his wife and daughter, farm on their micro-farm, often trading goods with neighbors. He believes that farmers need to think of more than profitability when analyzing the bottom line.  Providing for themselves and their neighbors and building networks among themselves in order to help one another should also be priorities. Michael is very proud of his work with the School of Adaptive Agriculture and delights in helping to populate the farm scene in his area with young people from this farm training program.

His failure – The first year working on a CSA farm with no irrigation infrastructure coincided with the beginning of a seven-year drought. It was a failure to anticipate.

His success – Helping to create the farmer training program

His advice – Whether you get into gardening or farming, observation is key

Farming for the Long Haul: Resilience and the Lost Art of Agricultural Inventiveness (New Farmer Library)

The New Organic Grower, 3rd Edition: A Master’s Manual of Tools and Techniques for the Home and Market Gardener, 30th Anniversary Edition by Eliot Coleman

This contest is closed. We are no longer collecting responses and have announced winners via our social media. We say “Thank You” to Michael and Chelsea Green Publishing for this offer.