Being bit by the urban farming bug and loving it.

Michael is a Physical Education teacher and father of four who in April of 2016, bought a half-acre of nonresidential zoned land a mere 6 miles from downtown Dallas.  He started clearing small 1000-foot sections using a weed eater and billboard signs.  That Fall he planted his first 30-inch bed with Sala Nova and a few cherry tomatoes and became hooked.

He now has 67 twenty-five-foot beds focusing on greens, carrots, beets and a couple of other veggies.  He hopes to transition from full time teacher to full time farmer in a couple of years.

He was starting off on a vacant property with lots of Johnson Grass, almost no money, and no way to cut it down and remove it, yet this was not going to stop Michael Bell from building his urban farm. He got creative and found a resource to not only help remove the grass but turn it into an asset and deep rich soil in one season. Relying on his creativity, he now has a half-acre farm and more customers than produce. All this and he only farms part-time! 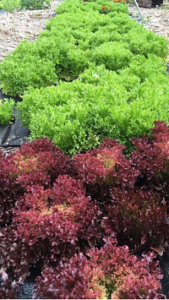 His failure – The tough summer that killed his crops

His advice – If you have a passion at something, you can make money at it