373: Aube Giroux on the Documentary “Modified”

Seeking out answers about food labeling. 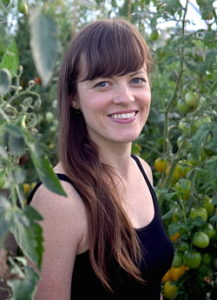 Aube (pronounced ōb) is an award-winning documentary filmmaker, organic gardener, and food blogger. She is the creator of “Kitchen Vignettes”, an online farm-to-table cooking show on PBS which received the 2012 Saveur Magazine Best Food Blog Award and is a two-time James Beard Award nominee. Aube holds an MFA in Film Production from York University. Modified is her first feature-length documentary, which she wrote, directed and produced.

In Modified, the filmmaker and her mother embark on a personal and poignant investigative journey to find out why genetically modified organisms (GMOs) are not labeled on food products in the United States and Canada, despite being labeled in 64 countries around the world.

Returning from a trip to Europe it became clear to Aube Giroux, that food labeling in North America was controlled by a very different set of rules and she sought to learn why. Documenting the process on video, she and her mother set out to learn about the labeling of genetically modified food ingredients, a journey that took a turn when her mother developed cancer. Instead of closing the project, she persisted and the resulting film garnered many indie awards.

Her failure – The difficulty in getting her film funded, and receiving lots of rejection letters

Her advice – Vote with the fork

“With every bite we eat, and with every food item we choose to buy, we are making a choice about the world we want to live in”
–Jali Giroux.

Altered Genes, Twisted Truth: How the Venture to Genetically Engineer Our Food Has Subverted Science, Corrupted Government, and Systematically Deceived the Public

Modified: GMOs and the Threat to Our Food, Our Land, Our Future

How to reach Aube:

Note: You can also find these books mentioned above for just a little bit more at one of our favorite local independent bookstores and know that you are supporting a small business.