Trekking around the world to learn about organic farms. 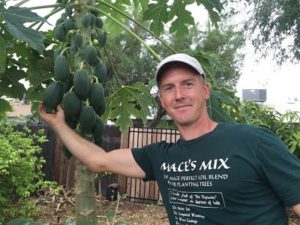 Jake started gardening in 2011 with a peach, fig, pomegranate and kumquat tree to save money on his food budget. He has joined us multiple times on this show about his urban farm, best gardening tips and tricks, and learning from failure. As wells as how he became inspired by his mission to live a life that’s compassionate with a a zero- to positive-sum impact on the earth, particularly through his commitment to a vegan lifestyle.

These days Jake is traveling the world WWOOFing and looking for his next great vegan meal.

Starting a new adventure with a minimalist lifestyle and travel to foreign countries is not something readily understood by most people. Yet when faced with life changes and an opportunity to start anew, that is exactly what Jake Mace is going to do. Having sold most of their possessions they are off on a world-wide WWOOFing trip visiting organic farms in various countries. He tells what motivated the change and how they are going to document their experiences.

His success – 1 million subscribers to his Jake Mace YouTube Channel next month, and his garden in the desert,

His drive – Living a zero impact- clean life, and living a vegan life

His advice – Learn a skill, don’t just do a job

Book and Movie recommended by Jake:

Movie: Far and Away

How to reach Jake: