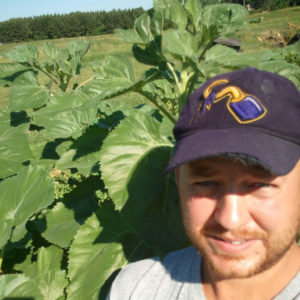 Shaun has an upstart one-acre mini-farm called BioManna Farms in Warrenton, NC.  On his farm he grows using a combination of conventional and bio-intensive techniques, slowly moving towards a completely organic set up and is growing in all four seasons, with majority of production coming during the typical growing season.  He is planning to expand to three acres in the future, and into other ventures to diversify, such as beekeeping, vermicomposting, and nursery growing. Shaun is in the process of starting a CSA, has taken agricultural entrepreneurship classes at his local community college, and has secured three local restaurants to buy his produce.

Greg talks to a newer farmer, Shaun Keesee, who is having some success using biointensive farming techniques. Shaun shares how he reclaimed the land his family was leasing out to a hay farmer and starting growing crops to sell to markets and restaurants. He is applying the skills he has learned through his reading, internet and agriculture courses at his local college.  His interest in organic farming is taking root in his community and he is gladly sharing a few tips here.

How to reach Shaun: