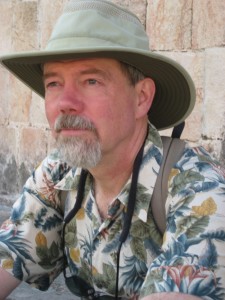 Toby Hemenway is one of the leading figures in permaculture and the author of the best-selling permaculture book in the world, Gaia’s Garden: A Guide to Home-Scale Permaculture, which was awarded the Nautilus Gold Medal in 2011 and was named by the Washington Post as one of the ten best gardening books of 2010. His new book on urban permaculture, The Permaculture City, was released in July, 2015. Toby has been an adjunct professor at Portland State University, Scholar-in-Residence at Pacific University, and has taught over sixty 72-hour permaculture design courses, many of them with an urban focus. He has presented lectures and workshops at major sustainability conferences such as Bioneers, SolFest, and EcoFarm, and at Duke University, Tufts University, University of Minnesota, University of Delaware and many other educational venues. His writing has appeared in magazines such as Natural Home, Whole Earth Review, and American Gardener. Toby has spent most of his adult life in cities, including Boston, San Francisco, Seattle, and Portland, with a ten-year stint in rural Oregon setting up a permaculture homestead. He and his wife now live in Sebastopol, California.