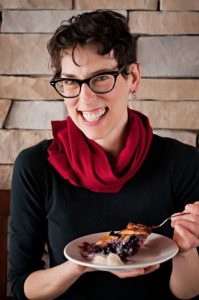 Sara is a seasoned chef, gardener, forager, and author.  She graduated from The Culinary Institute of America and prefers to create recipes that draw on her professional skills set yet are realistic for home cooks.

Sara’s writing has been featured in Saveur, Edible Ohio Valley, two Full Grown People anthologies, as well as on several websites. Her book The Fruit Forager’s Companion is published through our friends at Chelsea Green Publishing

It was more mostly just to keep herself busy that Sar Bir went to culinary school, and afterward she still found herself trying lots of new things. So it is not a surprise to hear that she stumbled upon fruit trees in the wild and learned she had an interest in foraging. She shares some of the important things to think about when foraging, and how foraging and gleaning can help you meet some of your neighbors. A few of the fruits we learn about are quinces, paw paws, and loquats.

Her failure – her book about hot dogs

Her success – becoming confident and happy with herself

Her drive – always being restless, and curiosity

Her advice – if you’re not screwing things up sometimes, you’re doing it wrong

Heavy Words, Lightly Thrown: The Reason Behind the Rhyme by Chris Roberts

How to reach Sara: