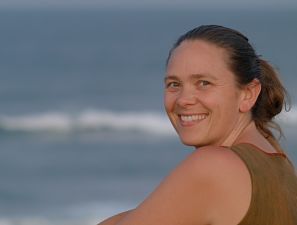 Tasmania-born and New Zealand-bred, Antoinette Wilson began her professional career in book publishing and dreamt of managing the editorial offices of Random House New York by the age of 40. Instead, just before her 40th birthday she took on the management of the harvest and labour at a CSA in rural New Zealand. She had begun studying towards a Permaculture Design Certificate and was committed to living a low-impact lifestyle.

During a 2015 documentary project exploring simple living, she realized the extraordinary capacity of film to educate, and teamed up with Jordan Osmond in Happen Films. The pair write, direct and produce short films and more recently their new feature film, Living the Change: Inspiring Stories for a Sustainable Future. The self-taught filmmakers live in a 20sq/meter (folks that is 215 square feet) unplumbed but luxurious room on the end of a shed in a friend’s 3-acre food-forest and have a passion for sharing stories that educate and inspire about how we can all live beautifully on earth.

She’s had a “greenie” intuition as a youth but spent part of her adulthood pursuing a publishing career and a side venture as a tango dancer, but Antoinette Wilson found herself living in a permaculture-based community for a year and it changed her life.  She partnered up with another community member to write and make documentaries about the lifestyle they were experiencing, and even made some short films about others who were doing their best to have better impacts on their space.  These documentaries and short films are inspiring others to take steps toward change too.

Her success – Being part of working with Jordan, writing this story, and making this film

Her drive – A desire to feel that things are right: in her body and in the world

Living the Change: Inspiring stories for a sustainable future

A Simpler Way: Crisis as an opportunity

Nourishing Traditions: The Cookbook That Challenges Politically Correct Nutrition and The Diet Dictocrats. by Sally Fallon

How to reach Antoinette:

This episode was sponsored by The Food Revolution Summit.
Visit www.urbanfarm.org/summit to support our show and learn more.