Addressing the impact water scarcity will have on food resources at a national level. 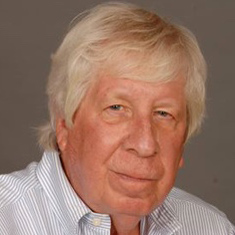 Jim is a former Regional Environmental Planner and was responsible for numerous Environmental Impact Statements, and Planning Studies in Washington, Idaho, Oregon and Alaska. He is currently president and CEO of The Chronicles Group, a not-for-profit corporation focusing on educating the public through media about profound issues that affect both human and ecological systems
He has written, produced and directed an array of prominent, socially significant productions, including “The Iceman Tapes,” A&E’s “Bad Cops,” and “Execution at Midnight.”

His environmentally focused pieces include “Running Dry” a documentary regarding the worsening global humanitarian water crisis, along with its follow up “The American Southwest: Are We Running Dry?” and  “Beyond the Brink” a film on how food shortages like the one in California’s San Joaquin Valley will lead to a National Security Threat (to be released Fall 2017).

Filmmaker and environmental planner Jim Thebaut has been working hard to educate others about serious issues involving the water-food nexus which can have a major impact on national security.  Although his upcoming film is regionally based, the consequences can have tremendous reach.  His message can be applied to any area and needs to be considered by all policy makers as they are faced with decisions that have lasting impacts.

Tapped Out: The Coming World Crisis in Water and What We Can Do About It

How to reach Jim:

Join us for chats about gardening topics with Special Guests each month. Live Q&A to assist with your questions
Sign up for the series!
Categories: podcast, Policy or legislation, Regenerative or Sustainable, Water WisdomBy JanisJuly 29, 20171 Comment
Tags: environmentfoodJim ThebautnationalplanningpodcastscarcitysecurityUrban Farmwaterwatershed