Enhancing your soils through an ancient, carbon-sequestering, process. 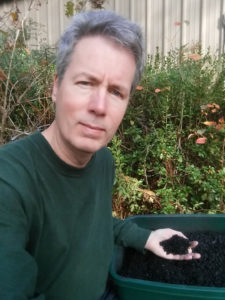 Brian is a systems engineer and project manager living in north Phoenix.  For the past 30 years, he has worked for GE, Boeing, Lockheed Martin and Honeywell on software for flight control systems in commercial and military aircraft.  Recently, he became an entrepreneur and started a small software development company.  To balance his high-tech career, he has enjoyed more simple hobbies like making beer, woodworking, and organic gardening.
During the Great Recession, he purchased a foreclosed property that had been neglected and abused for many years and he has spent the last 8 years renovating both the indoors and outdoors.  After removing 5 layers of different landscaping stone that previous owners had covered the yard with, he spread several inches of arborist wood chips over the dirt to reduce water loss and increase soil fertility.  In the backyard he converted a broken-down diving pool into a private aquifer by filling it with rock and gravel, connecting a pump to the drain pipe and covering it with topsoil.  He now has several fruit trees and a vegie garden growing on top of 3000 or 4000 gallons of secure rainwater.

In this podcast: Greg talks to Brian Smith, a transplant to Arizona who needed to improve his gardening results and found out about biochar. Brian explains the process that was used over 2000 years ago, to transform burned wood into a long lasting organic super buffet with nutrients galore. He tells how he was so interested in the results that he took his research to the point that he can now make his own biochar in his backyard.

How to reach Brian: