Build a six-week greenhouse for less than $100, and heat it for FREE!

For northern gardeners, starting vegetable plants as early as possible is key to a productive and successful food garden, since sometimes it seems we only have about a three-week growing season! That might be a slight exaggeration, but certainly gardening in the north is challenging. One of the key advantages of the Straw Bale Gardening method is that early in the spring when the ground is still very cold, the bales are warm inside as they begin the conditioning process. This allows at minimum a one- to two-week head start if gardeners use the bales to plant warm-season crops. Other gardeners turn to starting seedlings a few weeks early in the house under artificial lights and this works fairly well but also comes with its own set of challenges.  Damping off, spindly light-starved transplants, and difficulty maintaining the correct moisture and temperature can all make seed-starting indoors difficult. Outdoor options are better, with more light intensity, but can be expensive if a greenhouse is part of the plan. Less expensive plastic-covered houses can work very well but any year-round structure will need to carry a snow load and be heated in one manner or another. 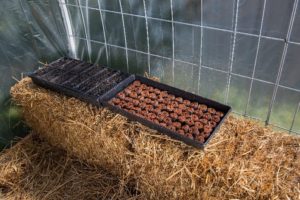 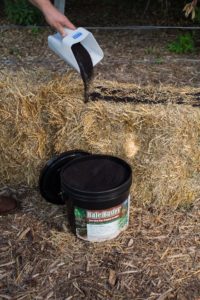 This spring, consider setting up a 7’x 8’6” six-week greenhouse. Placed in service about six weeks prior to your area’s average last frost date, this simple, inexpensive (less than $100) greenhouse will take an hour to build, and once it has completed its service as a greenhouse, the plastic cover is removed and the frame then serves as a trellis for vining vegetables like tomatoes and cucumbers. This tiny structure is heated by six to nine bales placed inside. As the bales are conditioned (using the simple process suggested for setting up a Straw Bale Garden), they get hot.  Temps of 140°-155° are not unusual and this heat source provides enough heat when the sun sets to keep the greenhouse warm. The warm bales make exceptional benches to place seed trays inside and start up to 540 vegetable starts in this tiny space. Up to 15 seed trays with 36 per tray will provide plenty of bedding plants for an entire neighborhood!
The basic structure is two cattle panels that can be purchased from any farm supply store, inside a wood frame made of four 2’x4’s. The entire structure is then covered in plastic. In addition to the two cattle panels and four 2’x4’s, you will need a 10’x25’ roll of 4-mil poly plastic that can be purchased at any local hardware store; this will cover the entire roof and both ends. Lastly, you’ll need a staple gun and staples, a bag of zip ties, and a ZipWall® zipper. The zipper can usually be found in the paint section of a hardware store. 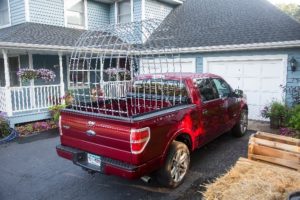 How to get the cattle panels home

.
The cattle panels are set up inside of a wood frame measuring 7’x8.5’, and once in place, form two arches. The two panels are placed side by side and secured together with zip ties. 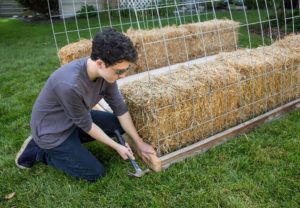 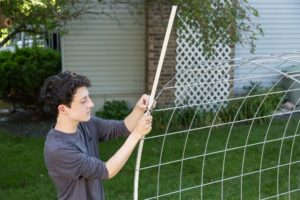 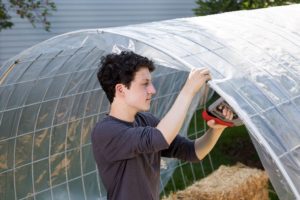 A thin piece of wood trim or PVC pipe is zip-tied to the ends of each fence panel arch, to be used as a tack strip. Cover the arch with some of the plastic, so the entire arch is covered from front to back, then staple the bottom of the plastic onto the surrounding wood frame and the ends to the tack strip. 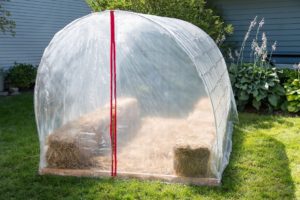 End panels are stretched across the ends of the structure and stapled to the tack strips in the same manner. Apply a piece of wide PVC tape along the roof and end-wall seam to provide strength. Finally, a ZipWall® zipper with a sticky back adhesive is stuck to the end-wall panel. Following the zipper’s instructions, zip open and slit the plastic with the included tool. This creates a zipper door for easy access.  This inexpensive greenhouse isn’t a year-round structure, but it’s very effective for early spring. 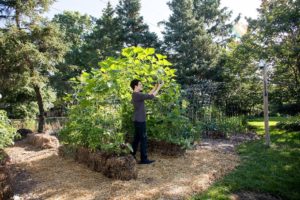 Once you reach a spring day where you are safe from any potential late-spring frost, remove the plastic off the structure and a few tomato, cucumber or squash can be planted into the bales that are inside the arch. These will quickly send vines up over the cattle panels and make a beautiful and functional garden for the summer. 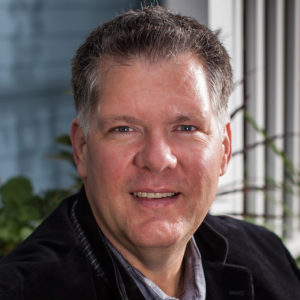 Joel, a farm boy who grew up tending a soil garden, shook up the gardening world with his first book describing his breakthrough Straw Bale Gardening concept. The New York Times called Straw Bale Gardening “a revolutionary gardening method” and his ideas have been enthusiastically embraced globally, making his books best-sellers in many languages. Joel earned a BS in Horticulture from the University of Minnesota and spends his summers tending his vegetable garden, doing research, and experimenting with new ideas and methods he can pass along.
Joel has inspired tens of thousands of first-time gardeners and a legion of “seasoned” growers who have found a new and better way to pursue their passion. His methods have enabled “retired” gardeners to begin gardening again since it eliminates some physical challenges found in traditional soil gardening.

How to reach Joel:

694: Lizzy Shapiro on Discovering Music in a Container Garden
September 2, 2022