Listen to her podcast HERE

In the Gospel of Matthew, Jesus uses the image of a sower in order to illustrate how some people receive his message and their lives are transformed by it, whereas in others, it does not take root.

Other seed fell among thorns, which grew up and choked the seedlings, and they yielded no crop. Still other seed fell on good soil, where it sprouted, grew up, and produced a crop — one bearing thirtyfold, another sixtyfold, and another a hundredfold. (Matt 13:7)

It is obvious why Jesus uses this imagery. All his listeners were familiar with how seeds were planted and how essential good soil is for yielding a good crop. They would understand his point: be the seeds that fall on good soil and produce a bountiful crop! In the same fashion Jesus talks about how the small mustard seed grows into a large tree, pointing to the importance each person can have in transforming the world.
How do these parables work in a society when an increasing number of people are detached from how food is produced? And the other way around: can we recover a more profound understanding of these parables if we connect more closely to how the food we eat is produced?

Traditions, myths and rituals of harvest

In my scholarly field, History of Religions, scholars have always been interested in comparing similarities and differences between different religious traditions. In the early generations of scholarship, this was understood as a testimony to the interconnectedness of humanity. When the various religious traditions of the world were seen in comparison, there were clear commonalities. All over the world, there were occasions in the lives of individuals that were marked by rituals: when a child was born, when two people decided to live together, when a loved person has died. Likewise, there were certain occasions in the life of the community that were often marked by ceremonies and feasts: the return of light and warmer weather in the spring, the first rain after a dry season, the various harvest seasons. During these festivals people expressed their gratitude to the divine beings and often sacrificed part of the crops to the gods in order to ensure their continued favor.
People tend to be very resistant to change when it comes to such traditions. It seems to be much easier to change the interpretation of the ritual than the ritual itself. In pre-Christian Scandinavia, at the site of the Norse pagan cultic center of Uppsala, there was an annual rite where an effigy of the Norse god of fertility, Frey, was carried across the fields, “for good harvest and peace”. After Christianity had been established in the area, the tradition continued, but now with an image of the local Christian saint St. Eric. The need to ensure good harvest and peace clearly survived the change of religions.

Many people have expressed surprise when I have talked about my interest in religion and gardening. “Religion and gardening?”, they say, “how are they connected?”. I think the question stems from a very modern understanding of religion. In contemporary, Western society, religion is often understood as a very narrow category, usually restricted to questions of faith, rituals, sacred objects and holy texts. But for most of the history of humanity religion, if such a term existed, was a much wider category, also encompassing norms for how to dress, what to eat, how to organize good societies etc.
Growing food has been basic for human survival for thousands of years, so no wonder it has been surrounded by profound reflection and deepest respect. These days many of us do not have to suffer hunger if an unexpected change in weather would reduce our yield. Still, a good harvest can nonetheless fill us with gratitude and awe and we feel that it is almost magical that such tiny seeds can be transformed in to great quantities of food that can nourish many people. No wonder that so many people find gardening to be such a meaningful way of spending their time!

The harvest in practice

If we understand some of the religious dimensions that earlier generations of people have attached to gardening, maybe we can gain a more profound connection to our own gardening, as not just a pastime that we practice for pleasure and leisure, but something that connects us to all generations before us, their hope, aspirations, fears and joys. And the other way around, if we learn more about how various religious traditions have encompassed gardening throughout the history of humanity, maybe we can gain a richer tradition of what religion has been and can be, of religion not merely as faith but also as practice. And maybe that way we can gain a better understanding of the meaningful character of the religious practice of our neighbors, maybe making it a little bit easier to live together. 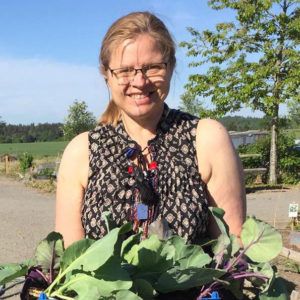 Lena is a Full Professor, teaching History of Religions in Stockholm Sweden. She is also an avid allotment grower of vegetables who last year harvested (literally) a ton of vegetables from her 120 square meters in two allotments in urban Uppsala.
Originally a medievalist, she specializes in inter-religious relations between Jews, Christians and Muslims during the Middle Ages. Her other research includes topics like religion and volunteering, religion and sexuality, religion and food, and more recently religion and gardening

How To Reach Lena: