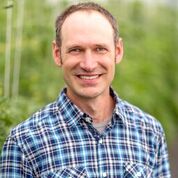 Ben is the author of The Lean Farm (winner of the prestigious Shingo Award), and The Lean Farm Guide to Growing Vegetables, both published in 2017 by our friends at Chelsea Green.  In that same year he was appointed to the 2017 Grist 50, a list of emerging green leaders in the United States.

He and his wife Rachel Hershberger own and operate Clay Bottom Farm in Goshen, Indiana, where they make their living on less than one acre by growing and selling specialty produce to restaurants, at a farmers market, and through cooperative CSAs.

It takes a dedicated minimalist to try living without adding new items to the property, and Ben Hartman took this simplistic mindset to most areas of his early adult life. Then when he too a look at his 5-acre farm he realized he could do with less unnecessary stuff and he found it improved his productivity.  The lessons he learned have helped many others become more efficient and he shares some of them here with us.

The Lean Farm: How to Minimize Waste, Increase Efficiency, and Maximize Value and Profits with Less Work

How to reach Ben: