A friend of mine says her “obsession” took hold a couple years ago after she read something online about “vermicomposting.”-or using worms to compost kitchen waste. She really felt bad that she was throwing away food stuff, but she lives in an upstairs apartment and doesn’t garden, so it was highly unlikely that she would compost outside. After my friend was reassured by a vermicomposter that it wouldn’t be smelly, she decided to proceed. Now, beneath her kitchen sink is a Styrofoam beer container filled with dirt, food scraps and mor e than 2,000 red wiggler worms.

“Red wigglers are voracious eaters and breeders, and they don’t sleep,” she said. She used a mixture of soil, shredded newspaper and peat moss.
“Red wigglers outperform all other worms,and they are much more adaptable to various environmental conditions.”
“Red wigglers are more well-acclimated than other worms. So for the most part, heat doesn’t bother them, and cold doesn’t either. Red worms can easily survive Wisconsin winters in outdoor compost piles three or four feet deep in compost. Their castings can be made into ‘black tea’ that most gardeners consider superior to any other commercial fertilizer. Vermicomposting is really “hard to screw up.” She feeds the worms once a week, and there have not been any worm escape attempts.
“If it was too dark, or too dry, the worms might try to climb up the walls of the container.” she said. If that should happen, she’d add moisture and leave the cupboard door open so the worms would burrow back down into the darkness they prefer.
When the container becomes too full, she’ll pour the contents onto the tarp and separate the worms from the composted soil. “I’ll give my excess (worm) stash to friends, and give the soil to a gardener.

“At first it seemed bizarre to have thousands of worms under my sink.” Now I don’t think about it. 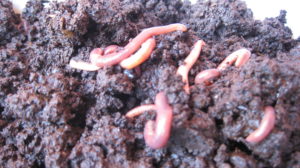 My friend said her seven year old daughter likes feeding the worms. “At first it seemed bizarre to have thousands of worms under my sink.” Now I don’t think about it. But other people are intrigued and it’s quite a conversation starter. Many of her young friends are already familiar with vermicomposting, which is being done in classrooms across the nation. A lot of schools don’t allow pets in classrooms anymore because they bite, get loose or die, which is traumatic. Doing this in the classroom is a great way to teach kids about recycling.

Join us for chats about gardening topics with Special Guests each month. Live Q&A to assist with your questions
Sign up for the series!
Categories: A Blog Article on, Gardening Basics, Kids and Gardening, Regenerative or Sustainable, Small Space GardeningBy KathrynOctober 15, 2017Leave a comment
Tags: compostred wormsred wrigglersvermicompost