Starting a farm from scratch as an urban-raised millennial. 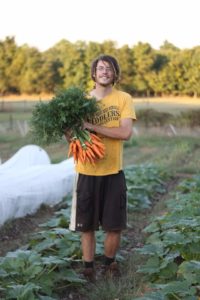 At the age of 25, Jared moved back to the land he grew up on to start a farm.  Gardening since he was a teen, he became interested in agriculture while at University. Now, he is striving to produce food to share with, and nourish, his community while teaching others along the way.
Taking advantage of an opportunity when his sister and her family bought the land next to their parents, he’s attempting the multi-generational farm dream in the middle of suburbia. On degraded soil and with ten thousand dollars, he started from the ground up. Although Jared is the only farmer at this point, he hopes friends and family will join as the project becomes further established.

Despite start-up expenses, infrastructure needs, vehicle repairs, and everything else; he survived, and the inaugural year of Earth First Farm was a success. He has a ½ acre market garden, and homestead quantities of livestock then he plans for the farm to evolve from a working venture to a place for education and reconnecting with nature.
Jared is also the curator at Dr. Jim Duke’s Green Farmacy Garden in Fulton, Maryland; a sanctuary with over 300 species of native and non-native medicinal herbs.

Being young and not having any land or farming experience did not stop Jared Gulliford from developing a plan and a dream to have his own farm.  He shares his story about how he came to the decision to pursue a living as a farmer, where he got his training and experience, and how he transformed his family’s properties into a farm.  Then once he got there he had to change the soil and he did this using elbow grease and old-fashioned techniques so that he would not have to use chemicals because he cares about what he sells.

How to reach Jared:

Join us for chats about gardening topics with Special Guests each month. Live Q&A to assist with your questions
Sign up for the series!
Categories: Farm Animals, Homesteading or Farmsteading, podcastBy JanisMay 30, 2017Leave a comment
Tags: farmingfarmsfirst yearJared Gullifordmillennial farmersNew FarmerspodcastUrban Farm