in an Urban Desert

The truckload of lovely, fragrant, composted soil arrived in our desert scape back yard on January 25th, 2017 and by January 27th we had an orchard.
Ok, so now for the back story.  My husband Dan & I arrived in Phoenix from the Midwest in 2013. Three years later we bought a house on the fringes of the North Phoenix Mountain Preserve Park.  Which means yes, our yard is basically rock. So we’ve exchanged the rich black humus soil of the Midwest for rock. But here we are, in a climate in which we can grow so many yummy tree fruits which would not have been possible in the Midwest. So how to have the best of both worlds?
A story from Greg Peterson had stuck in my mind, probably from 2 years ago.….A friend of his was yearning for a garden but knew it would take years to nurture any kind of soil to make that happen.  Instead, at Greg’s suggestion they just ordered a truck load of potting soil and voila! She had her garden. The idea of importing such a large quantity of growing soil had never occurred to me (having come from the corn belt where basic dirt is more than abundant, right?).
So I came up with the idea of building essentially a giant raised bed in our back yard.  To establish an orchard on top of our bedrock. And since this house is our forever home, I wanted this thing to look nice for the next 40+ years to come. We had a 20′ x 25′ square of red lava landscaping rock that had a few lantana, bougainvilla, red yucca.  With the layout of our property, the direction of the sun, etc., this seemed to make the most sense to convert into an orchard.
So, the sequence of events was:
12/3/16: Shoveled up the red rock & redistributed to the front yard. (which is xeriscaped)
12/17/16: Laid out the boundary and dug trenches for the footing.
12/30/16: Footer sand & retaining wall stonework arrived, with a 2 day weekend on the horizon to knock out this project.
1/1/17: Our footer trenches were now a beautiful moat, after 2 solid days of rain.  1 week wait for dry-out.
1/7/17: Foundation laid
1/19/17: Wall was done, ready for soil
1/25/17: Soil arrived, via semi (!)
1/28/17: Picked up our bare rooted stone fruit trees at the pop-up nursery
1/29/17: Trees were happily ensconced in their new home. Along with garden veggies such as tomatoes, peppers, onions, kale, chard
3/11/17: Second round of (citrus) trees arrived from pop-up nursery and were tucked in next to their stone fruit pals.

Additional back story is we spent our first 2 years in the valley (while dwelling in apartments) and then our first year in our house soaking up all the advice and knowledge we could while we awaited our ambitions of being urban farmers in the valley of the sun. Because while Dan & I have pretty good green thumbs, we knew it was a totally different endeavor in this climate.
We visited Greg, Kara & Jake’s properties. Sat in on classes at the farmers market & on-line. Went to the Great American Seed Up and pre-ordered our trees from Greg.

The particulars:
We planted the trees 4 feet apart. Each one was settled in with amendments of mycorrhizae, azomite and worm castings (not sure we really needed the latter as we were working with soil that was from 100% compost).
The menu (so far!) is peach (the threesome successive bundle), mulberry, pluerry, plum, jujube, loquat, lemon, orange, grapefruit, lime, mandarin, sapote.  We aspire to grow: mango, papaya, guava, cherry, and the ultimate….Aravaipa Avocado.  We still need to hook up with nearly a truckload of free mulch. We need to dial in the irrigation system (again, not in our skill set having come from a climate where it rains about every 4 days like clockwork) And we’re experimenting with the microclimate thing….Putting the tender salad veggies in an east-facing 6-inch gap between the wall and existing Bermuda grass. So they’re shielded from the intense western sun of the second half of the day. Ironically, the chard I planted in that gap 2 weeks after the first planting in the orchard, is double the size of the first planting.

Before and after, in succession: 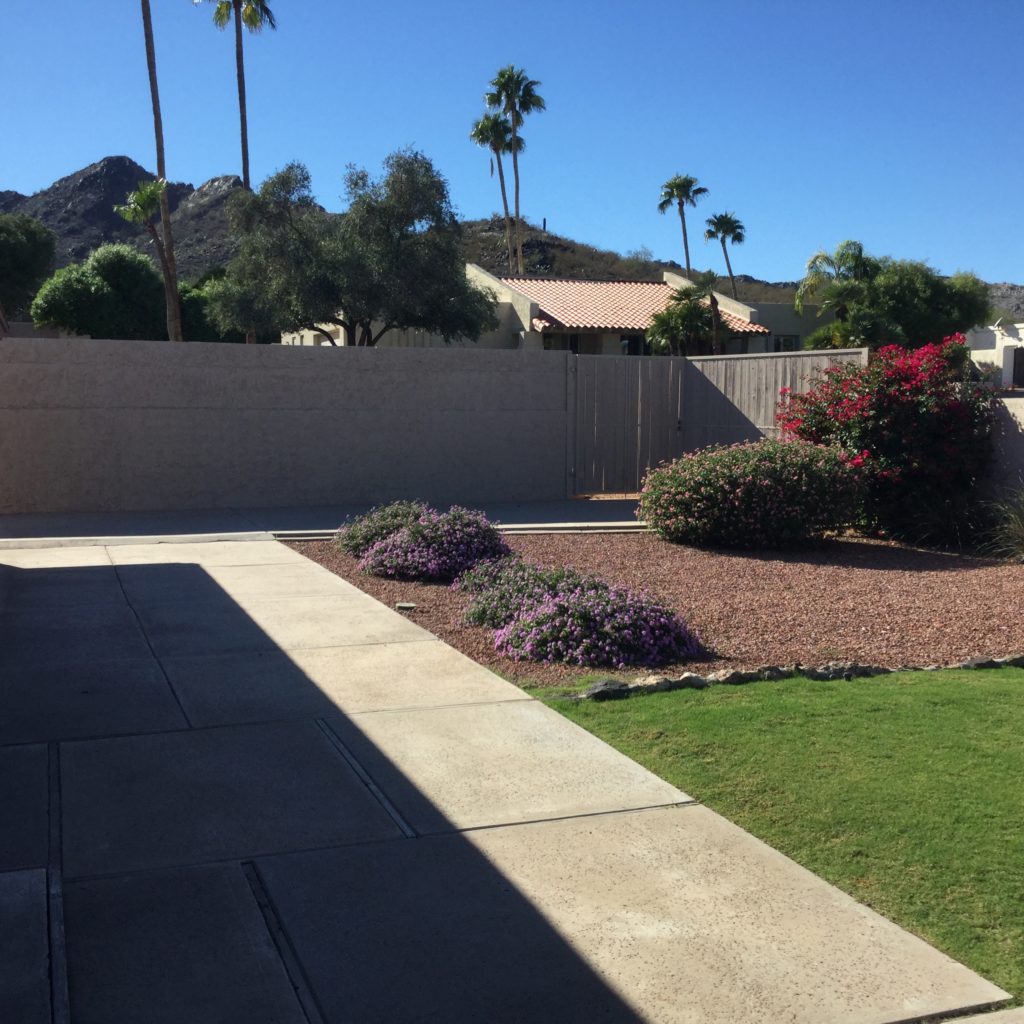 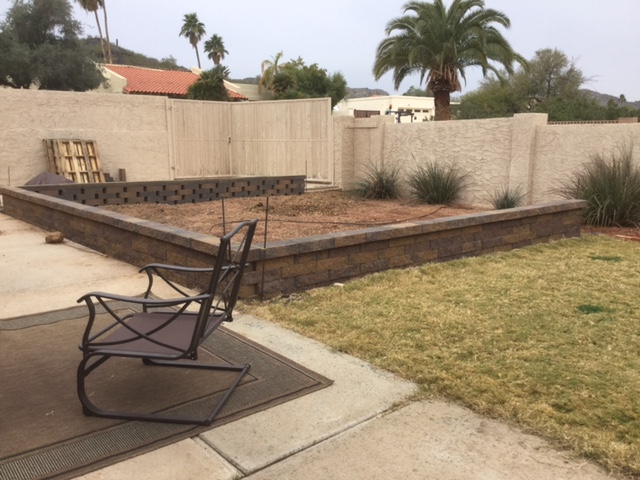 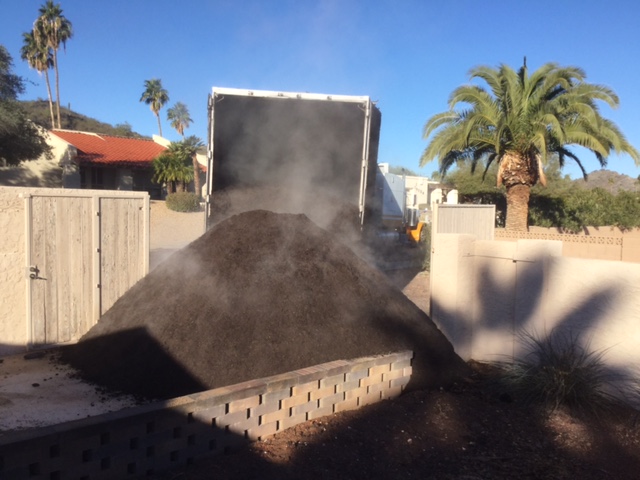 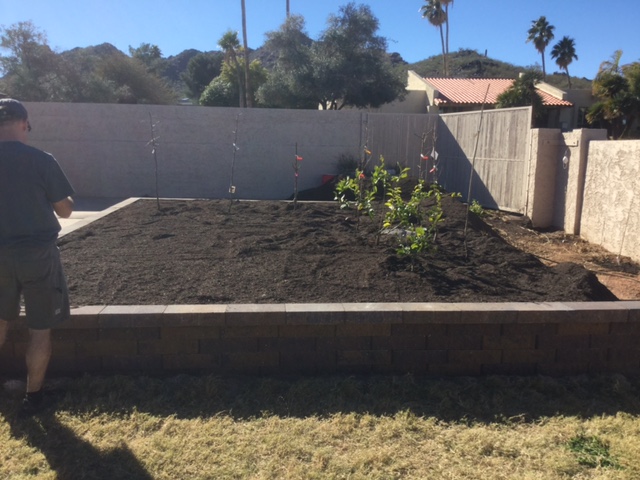 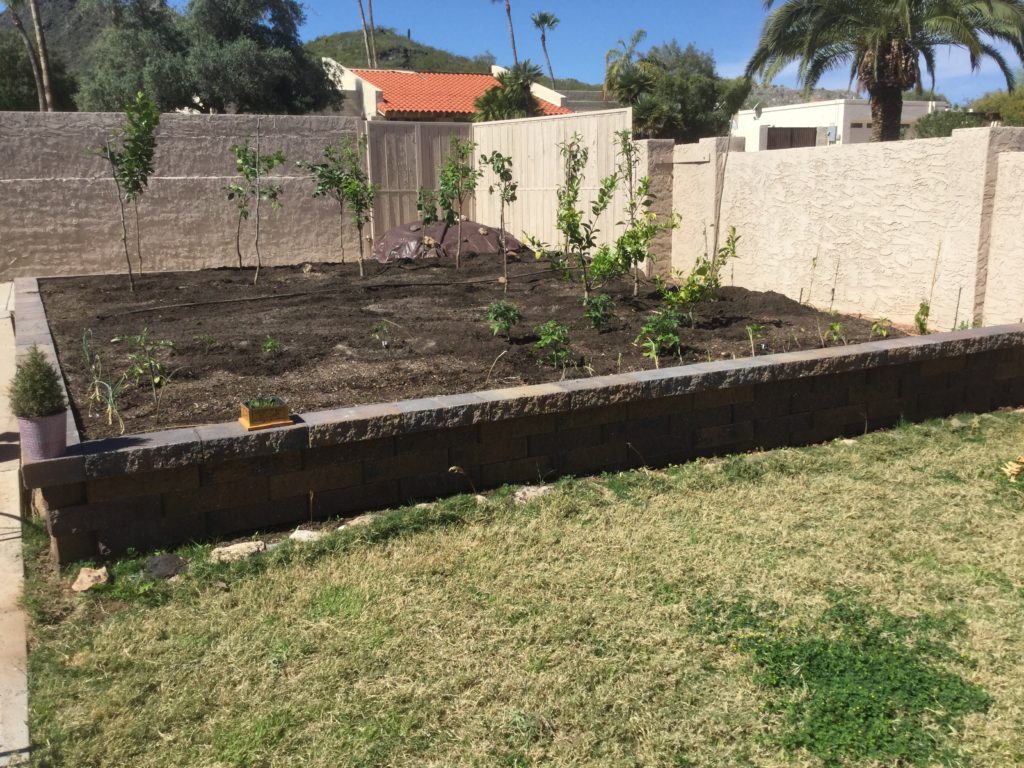 View more
About Us