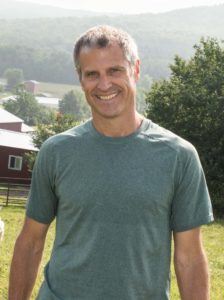 Gene is co‑founder and president of Farm Sanctuary, a national non-profit organization working to end cruelty to farm animals and change the way society views and treats farm animals. Hailed as “the conscience of the food movement” by TIME magazine and recently selected by Oprah Winfrey to join her Super Soul 100 dream team of “100 awakened leaders who are using their voices and talent to elevate humanity,” he was a pioneer in undercover investigations and instrumental in passing the first U.S. laws to ban inhumane factory farming practices.
He has traveled extensively, campaigning to raise awareness about the abuses of animal agriculture and our cheap food system. Gene has a master’s degree in agricultural economics from Cornell University, and is a faculty member at the Johns Hopkins Bloomberg School of Public Health. Vegan since 1985, he’s recently started competing in marathons and triathlons, including an Ironman, to demonstrate the benefits of plant-based eating.

The co-founder of Farm Sanctuary, Gene Baur, tells Greg about his life as a vegan and triathlete as well as what prompted him to create a safe facility for rescued farm animals.  He has many helpful tips for those who are wanting to try the meatless lifestyle and diet, and he shares some insight on how to work with those you disagree with.

Farm Sanctuary: Changing Hearts and Minds About Animals and Food

John Robbins – Diet for a New America: How Your Food Choices Affect Your Health, Happiness and the Future of Life on Earth Second Edition

How to reach Gene: