Listen to her podcast HERE

Life’s surprising turns – Chickens led me down an unexpected path

John Lennon said, “Life is what happens when you are busy making other plans.” In my case, it was chickens that happened.
Growing up in New York’s suburbs, I was a suburban kid who didn’t know any chickens. I was an adult, a single mother raising a daughter, when I settled on the West Coast Chickens came into my life while others pursued high-tech electronics in San Jose, California. It was the 1980s, when my neighbors were inventing personal computers and the Internet. I was getting chickens.
I was the kind of mother who always said ‘Yes’ to my daughter, unless I had a good reason to say ‘No’. So when this five-year-old asked for baby chicks, I gave it a moment’s thought, couldn’t see why not, and agreed. Off we went to a feed store, returning home with half a dozen chicks and a paper bag of chick starter.

What was I thinking?

That moment’s thought hadn’t been quite enough. The chicks were happy in the plastic laundry basket I found for them. We were delighted and charmed. We cooed over them and cuddled them. What was I thinking?
Now with the perspective of 30 years of chickens and three books about them, I don’t recommend getting started this way. I advise people to think it through: where are the chickens going to live, what are they going to eat, all the issues.

If you can’t find the book… 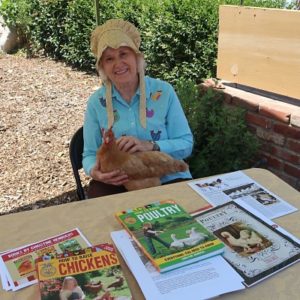 But in the 1980s, there weren’t any books about backyard chickens. The literature focused on industrial birds. I’d never heard of showing chickens, or the American Poultry Association. I had to learn by doing. Because I was already a writer, I began writing about chickens. I realized that if I wanted a book, I’d have to write it.
Ultimately, it worked out for me. Those chicks were my teachers. They grew – fast — and I found someone to build us a coop. We had a large yard, so they spent their days pecking around. One grew so much larger than the others – it didn’t dawn on me until the afternoon I heard him crow that he might not be a hen.

I learned he was a Buff Orpington. Another grew up to be a White Cochin. All the various colors and feathers! Chicken breeds were new to me, but I was fascinated. I learned that breeds are the repository of genetic diversity in poultry. Breeds breed true, which means that the offspring reliably resemble their parents. A breed has a unique appearance, productivity and behavior.
Old breeds that are considered foundation breeds are the result of domestication and selective breeding going back centuries. They are the breeds from which composite breeds were developed. Some of those have long histories as well, and some are modern.

I joined the American Poultry Association, and when I learned about bantam chickens, joined the American Bantam Association. Bantams are the introduction to chickens for a lot of people. They aren’t a breed, but an entire set of chicken breeds. They are just like full-size chickens but only one fifth to one quarter, 20 to 25 percent, the size.
I was alarmed to learn that traditional breed chickens were losing ground. The Livestock Conservancy was another organization to join, working to save old breeds of all kinds of livestock, including chickens, ducks, geese and turkeys. My horizons were expanding.

Sharing what I learned

As I learned about chickens, I developed the book idea. I shopped it around to publishers, and Voyageur Press stepped up. In 2007, How to Raise Chickens was published, just as chickens were getting noticed as the mascot of the local food movement. How to Raise Poultry followed in 2009. Both have been updated, as new information becomes available and chickens are appreciated for their contribution to history and culture, as well as food.
The third edition of How to Raise Chickens was published in 2019. I’ve also written the Backyard Field Guide to Chickens, to document breed history as well as give chicken lovers a Wish Book to swoon over.
All my books include information about general poultry husbandry as well as historic and literary background. I like understanding how poultry fit into the Big Picture of human history.
I do workshops on backyard chickens, and often bring a chicken to local events. People are interested, and it’s the best way to introduce them to keeping chickens.

As John Lennon said, life can lead us in directions different from the plans we make. But that life may be richer and more fun than our plans would ever have been. 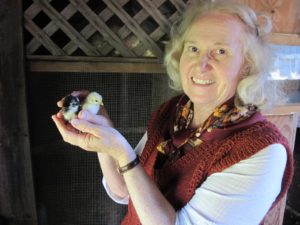 Christine lives on California’s Central Coast, in an unincorporated rural community. She has a small flock of about ten hens, some old friends and some newcomers. She holds a B.S. in Journalism from the University of Oregon and belongs to several professional journalism and poultry organizations.
Christine started writing about chickens in the 1980’s when she lived in San Jose and got her first hens. How to Raise Chickens was published through Quarto Publishing in 2007, just as the local food movement was starting to focus attention on our food system and backyard chickens became the symbol of local food. How to Raise Poultry followed in 2009 and her third book The Backyard Field Guide to Chickens was published in 2016.  This year her first book How to Raise Chickens has been updated and re-released.
Christine Heinrichs’ books are available through online booksellers, at Tractor Supply stores and many other book and feed stores. https://www.quartoknows.com/authors/1443/Christine-Heinrichs/

View More
About Us