What’s Eating My Garden??
An Epic Mystery Adventure with a Twist at the End!

A note from Farmer Greg: 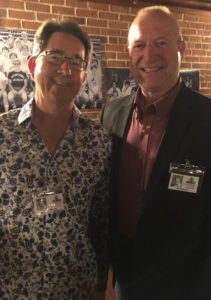 Greg and Jim at their high school reunion

What an adventure this is!  Jim and I played email tag back and forth for three months in the fall of 2018 trying to discover their garden eating culprit, but before we get to the story I have one heck of a preamble. Time goes by and before you know it you are sitting at your 40th high school reunion…OK I was sitting at my 40th high school reunion.  Given that I am a bit of an introvert (surprising I know, but it is true) I was doing a little bit of hiding out when a group of people appeared in front of me so I approached and we did the standard introductions.  Hey it has been 40 years and with almost 700 people in my graduation class at Camelback High here in Phoenix there were many people I did not recognize.

It came around to me and I gave my standard answer “Have you ever heard of the Urban Farm?”…and the guy standing next to me said “Oh my god, I am the rat guy!!!”  What a small world we live in. I had been interacting with Jim and his wife Roxanne for the last 6 months via email and we never knew we went to high school and graduated the same year.  This will be a fun story that we will share for years to come.  Meet Jim & Roxanne – they live in Chandler, AZ and love to garden.  Because of their extensive process to figure this out what was eating their garden I asked them to write it down. 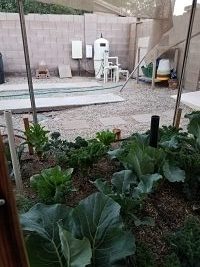 Crime scene with garden bed and nearby pool equipment.

We live in southeast Chandler, AZ in a neighborhood established 20 years ago.  Last year in mid-September (2018) we planted romaine lettuce, curly kale, rainbow blend carrots (all seed) and six small broccoli plants in my vegetable garden (raised 6’x12’ plot).  Within a couple weeks everything was coming up nicely and all of the small plants were thriving.
Sometime in late November we noticed romaine leaves were being eaten, and began a nightly inspection for caterpillars.  Sure enough, for the next few nights we found a few.  A week later the romaine leaves were still being eaten (worse than before), but there weren’t any caterpillars to be found.  Interestingly some leaves had been eaten down to the rib and pulled from the romaine plants.  Two of my broccoli plants’ center stalks had been “snipped” off and were lying next to the plants.  Our next thought, it must be birds and covered the entire garden with shading cloth (18” height).

A sneaky thief and the traps are set

After being out of town for a week and looking under the cloth we found the center stalks of the remaining broccoli plants had been cut off, nearly all of my romaine plants were completely eaten and whatever ate them was now at work on the kale.  Wow something is sneaky!
Ruling out rabbits because they can’t get into our yard, our next thought perhaps it could be mice, we set up mouse traps, baited with peanut butter and a game trail camera.  Determined to catch the culprit in action we monitored the garden, traps and camera every evening for the next few days to no avail…the traps were untouched and there were no pictures.

At this point we gave up and abandoned the garden for over a month harvested a few things the culprits didn’t get.  Then got the itch again and (having not learned our lesson) went and bought two six-packs of broccoli & cauliflower and planted them on January 12, 2019.  By this time the romaine was pretty much eaten to the core and the kale was not much better off.  We covered the garden again in the same manner, but with bird netting this time (don’t ask me why).
On the morning of January 13th, two of new plants had their center stalks cut off – – thoroughly baffled and equally disgusted, we emailed Greg Peterson at the Urban Farm for advice.  We have relied on UrbanFarm.org website for veggie planting tips, etc., since I built the garden.  Greg responded immediately, requesting photos.  With some more research and Greg input we thought it could possibly be cutworms, and so I encircled each remaining plant with a ring of 3 to 4 inch high cardboard “sleeve.”  Over the next few days the kale was still being eaten so cutworms it was not.

Another clue and the identity uncovered

This time not giving up we changed tactics and set up a different brand of game trail camera.  The next morning: BINGO – – VERMIN!  It looked like a mouse, so we set 12 mouse traps, this time baited with kale.  The next morning we found two of the traps sprung, no mouse, and more kale had been eaten, re-set the traps at different angles, but had the same results the next few days. 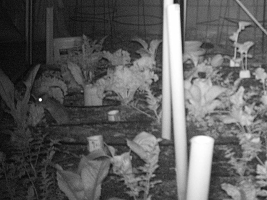 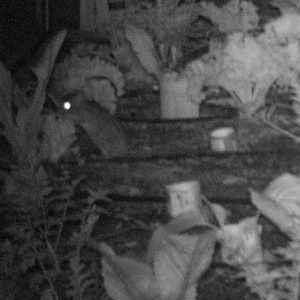 In looking closer at the camera photos again, but this time on a larger screen, we realized the rodent was larger… it was a RAT!  We went back to the Internet and found a good deal of information on urban rats on MrPackRat.net.  Something we learned was that pack rat’s nest close to food, and favorite nesting sites include burrowing under pool filtering equipment and under A/C units – – that surprised us, as we assumed the rat must be coming from a nearby park.  Also, rat droppings will be found around the nest site.

Our two A/C units and pool filtering equipment are on the same side yard as our garden, so when we read that we got a little queasy, but found none of them near the A/C units.  Exploring further I lifted the heavy tarp that covers the pool equipment and found rat droppings, we did not find any ground displacement or burrow openings.  As I started to remove the tarp a rat came flying out from underneath, ran straight up the block wall and dove into an opening on top.  I quickly placed a block brick over the opening.
As I removed the tarp two more rats came flying out, ran up the same wall and tried desperately to get into the same hole the first rat dove into.  It didn’t take but several seconds of running around and over the brick I placed on the wall, when they changed plans and shot over the fence into my neighbor’s yard.  I called him and learned he had been having the same problems with his veggie garden (which is just on the other side of the wall the two rats jumped over) for about the same amount of time, and had not figured out the cause either.  I had him check his A/C units (which are in the same side yard as his garden) and sure enough he found displaced dirt and a hole on the backside of a unit.  He checked the perimeter of a shed (also in the same side yard) and found a second burrow hole.  Back to the Internet we went for the best way to catch these sons-of-guns.

The culprits are finally caught… and an overlooked clue

I won’t go into details of the first (failed) attempts – – but it did involve lots of cursing on both sides of the fence.  We finally hit upon a YouTube video* that showed how to build a two-foot long “tube” with 2×6 wood, placing two Victor rat traps (much larger than mouse version) inside the center of the tube, with the snapping bars facing each other, then lining the “floor” of the tube/tunnel with the preferred bait (kale in this case).  Within two days we had four rats caught.
My neighbor filled-in his two burrow holes, so we don’t know if there were young rats in them; nor do I know if there were any in my brick wall, because I have yet to remove that brick!  Seeing as how a pair of rats can have as many as 15,000 descendants in a single year, my guess is there were young rats in at least one of the nests.  More rat lore: over the course of months of this “infestation” I noticed kissing bugs in that side yard, but did not give it a second thought.  Kissing bugs are a sign of rats, because they feed off the blood of a rat while it is sleeping – – not a pleasant thought.  Happy to report the re-re-planted garden is doing great, and hopefully, this article will help folks recognize an “urban” pack rat problem, and save them much grief, anguish and a ruined garden..! 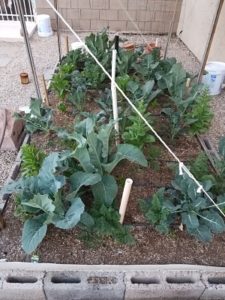 *Manager’s Note: Rodents are pests that can cause many problems in our gardens and homes and are attracted to the food growing / compost building methods we teach. Cats are our preferred method of rodent control, however this is not always an option. We strongly recommend against using poison that is brought back to the den or left out in the open as this is problematic for the ecosystem and will harm the food chain.  And we do not endorse catch and release for rodents as this just moves the problem to someone else. The trap mentioned in this article is one method of control that we will test for ourselves. The video mentioned above is 10:51 minutes long with a unique music score and no voice overs. There is enough information to build the trap yourself. Caution – the video shows mice in the traps and may not be suitable for children to see, watch at your own discretion.  Click HERE to see the video. 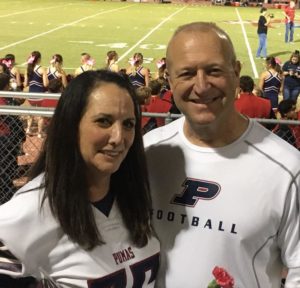 Jim & Roxanne Malinski are both Phoenix, AZ natives (born at St. Joseph’s Hospital about a month apart).  She was a west side girl and he was an east side boy (good thing they didn’t meet in high school, because east side boys were afraid of west side girls in the 70’s….).  She attended Maricopa Community College and University of Arizona, and he attended Phoenix College and Northern Arizona University.  They met in Chandler in the mid-80’s, just after beginning our careers.  Rox has been a nurse and Jim has been in public safety for the past 34 years.  They have a son who is a senior in high school – – it looks like he’s headed to Arizona State University, so we’re going for the state university trifecta!

How to Contact them: Please leave a comment at the bottom of this article, or send us an email at podcast@urbanfarm.org and we will forward it to them.