Telling a story of young environmentalists reaching for their dreams. 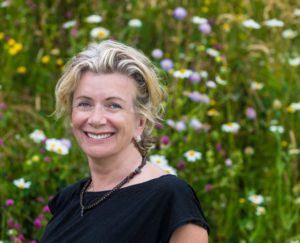 Vivienne came from a long family line of market gardeners, academics and rebels, yet somehow found herself having lived for 20 years in a Chicago high rise practicing corporate finance law. She really missed the landscape of her childhood – between Dublin and West Cork, and after getting breast cancer in her early thirties, she left corporate law, followed a childhood dream and started writing scripts.  She went back home and bought a small hill farm where her love for natural landscape, writing, and trying to make the farm hers, came together and gave her the opportunity to write the script and then direct Dare to be Wild, released spring 2016.

DARE TO BE WILD, is a romantic adventure based on the true story of two young environmentalists, whose quest is to show the world the power of wild nature as they reach for their dreams – one garden, one vast desert, at a time.

In This Podcast: Becoming a scriptwriter had been a goal she set to the side while she worked her way into corporate finance law. However, when Vivienne DeCourcy heard the story of a young award winning garden designer’s journey, she found her way back. She shares how searching for a garden design consult then filled her need to connect to nature and introduced her to an amazing woman with an amazing story. This is the background of how the film Dare to Be Wild was completed.

Citizens: A Chronicle of the French Revolution

Mary Reynolds book The Garden Awakening: Designs to Nurture Our Land and Ourselves

How to find the movie, or reach Vivienne:

Dare to Be Wild Movie: on Amazon and iTunes

This episode was sponsored by Health IQ.
Visit them at healthiq.com/urbanfarm to support our show and to see if you qualify for lower insurance rates.