285: Cyfrin Barefoot on Moving From Poverty to Paleo. 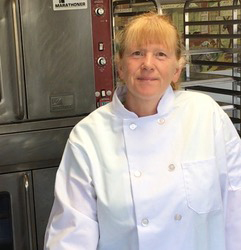 Cyfrin’s childhood was rooted in deep poverty in the Detroit ghetto. As an adult, she raised six children and found an avocation of fighting for food justice. She made her living as an organic farmer for seven years, and later founded a non-profit that established and ran a 32-acre organic farm.

Spurred by memories of childhood hunger and informed by years of farming, Cyfrin’s creative instincts came together in the creation of the Free Farms project. She obtained a business degree and then created Savor Tooth Paleo, a gluten-free and paleo bakery.  Company profits will be funneled into the acquisition and development of land in impoverished neighborhoods, as well as funding ongoing food production. The fresh organic food produced on these Free Farms will be available to area residents for free.

She had a feral childhood in the ghetto of Detroit and entered the foster care system at age 7.  Later, as a young mother Cyfrin Barefoot wanted good food for her own children and became an organic farmer.  Then, she fought for better food options for poor families and won.  And, after a significant and heartbreaking business setback she rebounded to create a health-food business offering delicious foods that fit paleo diet preferences.

Her success – Learning that HER life mattered, and learning to take care of herself

Her drive – Her desire to do good, and to make other people’s lives better