Is Backyard Bee Keeping a Good Idea in the South?

I want to share with you all some exciting news. I survived my first full year of bee keeping! Although it feels good to have ran the race to the end, it wasn’t quite the big celebratory win I was hoping for. You know that finish when the runner bursts through the ribbon, chest thrust forward with arms up, crowds cheering in the background? Well, scratch that from your mind. It just wasn’t that kind of finish.
It was more like the race I heard about the other day where the runner collapsed just short of the finish line. Unbelievingly, two selfless runners sacrificed their big win to pick her up off the pavement and support her across the finish line. If you could picture my bee keeping accomplishment in a snap shot, that would be me in the middle, wounded and plum worn out. The man on the right side holding me up would be James and the one supporting my left would be Ryan. I met them both at a beekeeper’s meeting and they are the only reason I was able to step over the finish line of my first year of bee keeping. Humbling, I know. 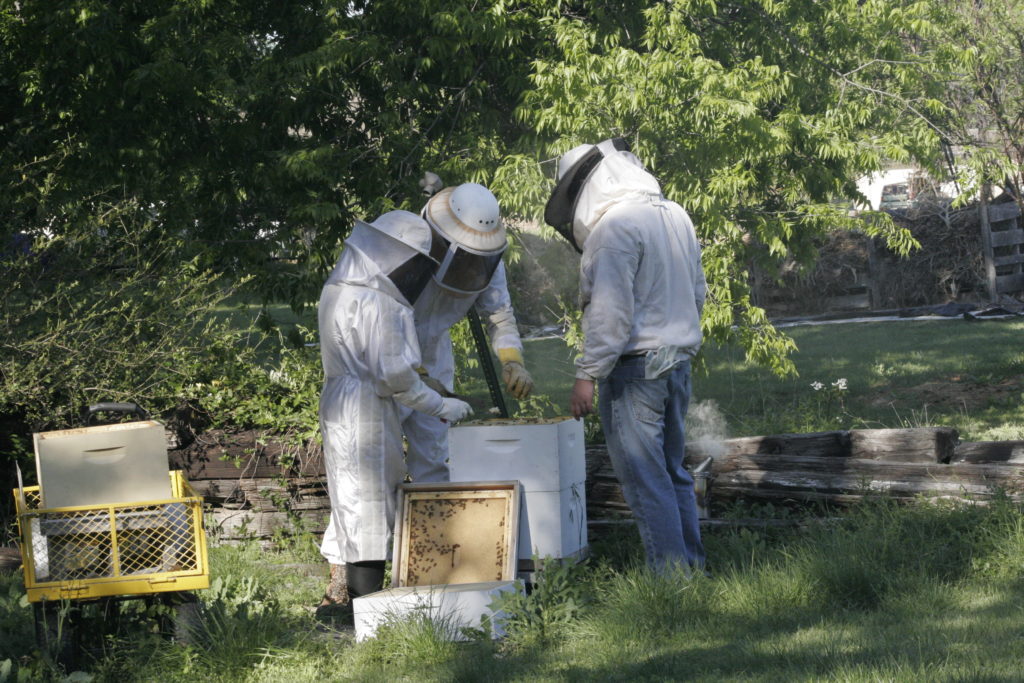 Why was this milestone so dramatic, you ask? Somewhere along the way my beehive became Africanized. Allow me to explain.
Let’s back up and I will let you in on a little-known fact. Bees are not native to North America. Yep, it’s true. The colonists brought them over from Europe so that they could sweeten that pumpkin pie on Thanksgiving. Now let’s fast forward to the 1950s in Brazil. Someone had the bright idea of bringing African bees over because they were hoping for more honey-making goodness, amazing comb-building ability and acclimation to a temperate climate. African bees are all that, except you can’t miss the fact that they are trying TO KILL YOU! Let me tell you from experience that they don’t just sting indiscriminately, they go for the face first. Eyes, ears, nose, mouth, all those major body orifices, all fair game. If that won’t get you running, I don’t know what will!
All this Brazilian bee keeping was supposed to be a closed experiment, of course. However, several swarms escaped and the rest is history. These aggressive bees have been making their way north by breeding with the drones (male bees) in Southern California, Nevada, Arizona, New Mexico, Texas, Louisiana, Georgia and Florida. Moving steadily north, they have been found as far north as Utah, Colorado and Tennessee.
Let me just take a moment here to point out that experiments like the introduction of African bees are happening today, too. Consider the fact that we have genetically modified salmon and mosquitos swimming and swarming about in various countries. Rest easy, I am sure nothing negative will happen in those situations. Anyone getting concerned yet? A’hem, back to bees. 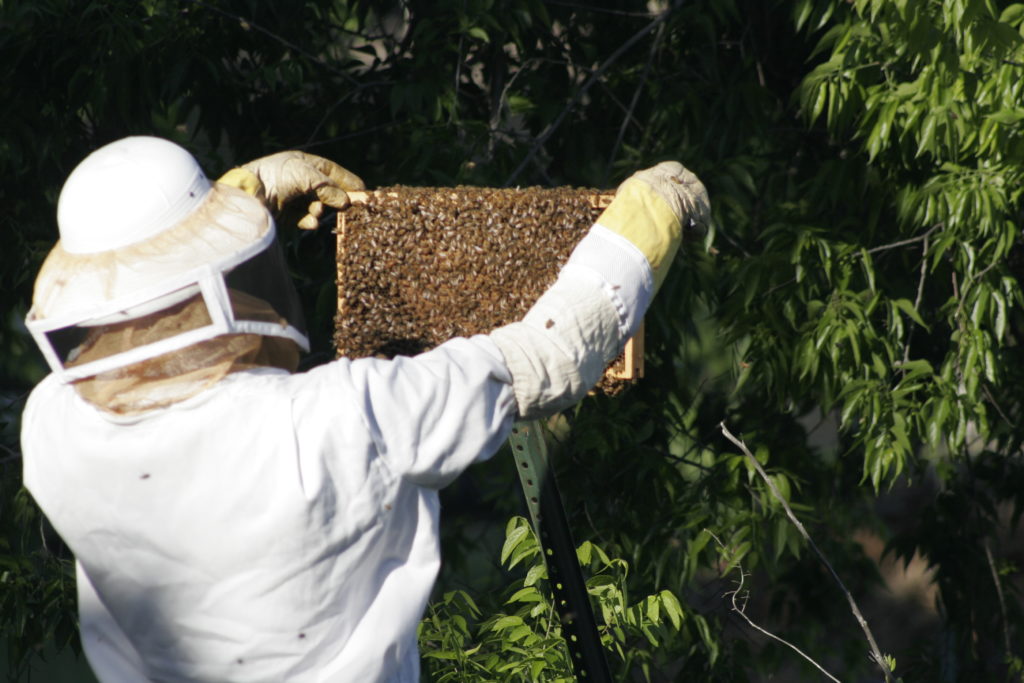 Now, these African bees have mixed genetics with their European counterparts, so they are toned down a bit. Honestly, I think, out in the country, with a safe suit they would be manageable. Man, would you pull in the honey! They do say these bees are more resistant to diseases and pests, which could be a huge asset. However, when you have them in your backyard they can quickly become a danger to those around you.
To make the situation even more complicated your bees can start out gentle and sweet and then turn into a “hot hive” as bee keepers call it. If your bees swarm in your absence, the new queen would have mated with drones in the area, some of which might have Africanized genetics. If you are a bee keeper in the South the trick is to NOT let your guard down. This is a hard thing to do because you will see videos of beekeepers up North tending their bees in a tank top and shorts and you will want to try it too. You will also get bad advice from Northerners on beekeeping groups. It is not their fault. They are simply just dealing with different genetics. It is important to meet people locally to swap bee advice with. 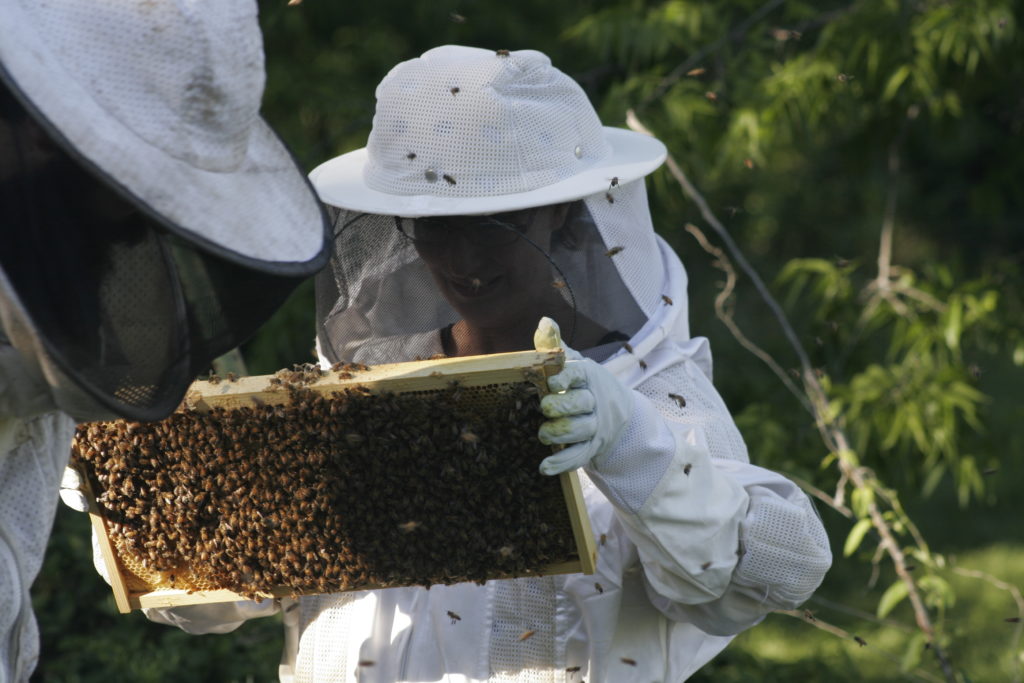 Joining the local beekeeping association made all the difference to me. This is where Ryan and James come in the story. They both very gallantly offered to help me find the Africanized queen in my colony and replace her with a gentle European-bred queen. After about six weeks the baby bees will come out of their cell programed with a new genetically driven mind set. Hopefully it will be somewhere along the lines of, DON’T KILL THE BEEKEEPER! I am so grateful to both brave men for stepping in and helping me cross the finish line of my first year of bee keeping. Hopefully next year will be a calm and peaceful year managing these beautiful and fascinating insects, not to mention sweetened with a little honey in my pumpkin pie.

Anne-Marie or Dash (for the hyphen in her name) is an urban farmer in Dallas, Texas. She raises chickens and rabbits on less than ¼ of an acre.  Plus, she has turned her front yard into a large stand-out-in-the neighborhood vegetable garden. In addition to the farming she does on her homestead, she helped create a community garden literally from grassy field to thriving garden. What stands out about her little urban homestead is her determined out of the box approach to overcoming obstacles. You can follow her adventures on her little urban homestead by visiting her blog, BloomWhereYourPlanted.com.

Join us for chats about gardening topics with Special Guests each month. Live Q&A to assist with your questions
Sign up for the series!
Category: A Blog Article onBy TaylerApril 17, 2017Leave a comment
Tags: beekeepingbeesUrban Farming