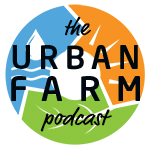 Updated: December 2016
The Urban Farm Podcast recently hit another milestone – we’ve passed our first year mark AND reached 175 episodes (and counting)!  In honor of this achievement, we’ve decided to update the list of Top 10 Most Inspiring episodes to date. I have to say – once again, this list was NOT easy to create or update.  Every one of our interviewees has had something interesting and exciting to share, and there were many EPIC stories, so narrowing this list down to just 10 was nearly impossible. After much deliberation, may I present to you The Urban Farm Podcast’s Top 10 Most Inspiring Episodes:

1. Toby Hemenway on a Permaculture Way of Life – Show Notes

My very good friend Toby Hemenway lived his life to a higher code that was all about living in tune and in conjunction with nature, and part of that was teaching others how to weave that code into their daily lives as well.  Toby is known world wide for his teachings and his amazing spirit which was a gift to everyone he touched.  Many people may have been introduced to Toby from his best selling and award winning book Gaia’s Garden, and The Permaculture City.  Toby passed away just before Christmas this year, but his presence will be long lasting around the world.  You can’t help but be inspired by his work.

This was one of my most recent additions to this list, as my conversation with Brendan was one of those times that I was grateful it was a recorded podcast and that I could share it with my friends and family after I was done.  Brendan has his degree in Molecular Biology and originally pursued a career in the pharmaceutical then nutraceutical fields before he realized he was not really helping people the way he wanted.  So he changed directions a little and started out on his own focusing on liver and gut health.  He explains how the foods we eat are crucial to our overall health and how so many of the diseases being treated now can be traced back to the health of the bacteria in our gut.  This is one podcast that you will definitely want to share with those that you care about – regardless of where they stand on growing their own food.

Affectionately known as “America’s Favorite Teacher,” Stephen Ritz is a changemaker altering the lives of his students in the Bronx by teaching them how to grow food, not only for health but for economic opportunity as well. His students and community have together grown over 25,000 pounds of vegetables, and their efforts with Green Bronx Machine have helped increase students’ participation in school and opportunities for their futures. It’s no wonder he’s been such an inspiration to his students and to people around that world- his energetic personality incites passion in all that hear him and his go-getter attitude teaches his students that they are all “Amer-I-cans” that can do anything they set their minds and hearts to.

Lisa Steele is inspiring people every day by spreading her knowledge of keeping chickens with the world. She has a website with a blog, a Facebook page, and even two books on raising chickens and ducks for eggs! If you’ve ever considered keeping chickens, or if you already do and want to expand on your knowledge, you owe it to yourself to give this episode a listen!

Yes, that really is Jason Mraz the Grammy Award winning singer/songwriter on this list.  Jason has other passions besides music, he is a backyard homesteader with a 10-acre subtropical fruit orchard where he grows avocado, coffee and 25 other fruit varieties.  He tells his story of how he got started, how he invited all his neighbors over to get advice, and how that early idea has grown into his beautiful orchard.  In part two he talks about the challenges of being on the road and still taking care of his land.  He also gets a chance to connect with other farmers in the communities and towns he visits and he talks about that as well.

Scott Murray is a part-time farmer, part-time organic agriculture consultant with 42 years of organic agricultural production experience in the United States and Mexico. He has a multitude of experience with conservation, food production, and environmental leadership—including serving as an elected California Conservation official for the last 22 years. Scott also specializes in farmland preservation projects utilizing Smart Growth Principles. He is practically an encyclopedia of agriculture, and our interview with him is rich with juicy information about farming. By the way, Scott is certain that ANYONE can become an urban farmer in just 4-5 days. How? I guess you’ll just have to listen to find out…

Ocean started as a food activist before he even hit double digit on the number of birthday candles he could blow out by trying to educate his classmates to eat healthily. Greatly inspired by his father but a force to be reckoned all on his own, at 15 he spoke before the United Nations, and at 16 Ocean created an organization to empower teenagers as leaders in their own community which eventually went international.  Now as a founder of the Food Revolution Network, he is making a difference again as they work on many projects include one to change the education of new physicians on the importance nutrition.

Carol Deppe is a rock star in the urban farming world, and it was an absolute treat to have her on the show. Holding a PhD in genetics from Harvard University, Carol is an incredibly intelligent woman. She specializes in developing Open Source varieties of crops for organic growing conditions, sustainable agriculture, and human survival for the next thousand years, and has written three books: The Tao of Vegetable Gardening, The Resilient Gardener, and Breed Your Own Vegetable Varieties. In our interview, she shares with us the innovative “Eat-All Greens” method of growing food.

“Every time you buy new seeds, you are starting over.” Bill McDorman has been accused of being a “maniacal advocate for everybody in America to save their own garden seeds,” but if you could see what he’s seen and understand his seed secrets, you might just become one, too. Bill teaches Seed School, a nationally recognized week-long training, as well as Urban Farm U’s Seed School Online. Without fail, his students adopt his immense passion for seed saving and leave class with a whole new set of knowledge and skills, plus a renewed perspective on what it means to grow food. I guarantee this episode will inspire you to get out there and start saving seeds.

I couldn’t create this list and not mention Ginger. From the moment I read her first email in my inbox about her off-grid eco-village and subsistence lifestyle in Alaska, I knew I could learn a lot from Ginger. Whether she’s tending to her garden (even in the Alaskan winter), raising animals, catching fish, foraging for wild edibles and medicinals, upcycling old materials, or making the open-ocean commute between town and her homestead, Ginger knows how to handle the elements and create simple abundance at her homestead in the Alaskan wilderness. Listen and be transported to one of the last wild places on Earth.

Jennifer Hashley has dedicated her life to changing the food world. A previous Peace Corps volunteer with a Master’s in Agricultural Policy, Jennifer serves on boards of the Urban Farming Institute of Boston and The Carrot Project, a small farm financing organization.  She is a farm business planning instructor for the Massachusetts Department of Agricultural Resources and has organized farm labs and field trips for graduate students in the Tufts’ University Agriculture, Food and Environment program. She is also the director of the New Entry Sustainable Farming Project, a beginning farmer training program that assists limited-resource individuals to begin small-scale commercial agriculture in Massachusetts as a way to preserve farmland and to expand consumer access to locally-grown foods. Her passion, dedication, and expertise are wildly contagious… If you listen to this and suddenly want to change the course of your life to serving others through agriculture, don’t say I didn’t warn you!