Scott Murray is a part-time farmer, part-time organic agriculture consultant. In today’s episode, he shares with Urban Farm U the ins and outs of avocado farming and how ANYONE can become a farmer in just 4-5 days.

How to Grow More Vegetables: Than You Ever Thought Possible on Less Land Than You Can Imagine

Introduction to Permaculture by Bill Mollison

Soil Lofting: Scott mentions this term in the podast. What does it mean? Scott says: Back in college I had the opportunity to work with Alan Chadwick who was the British innovator behind the french intensive raised bed, being transformed into BioIntensive growing beds. Alan used the term “to Loft” the soil. This was used in reference to the effect of double dug beds, where we “Lofted the soil” while digging in organic matter and compost. The key is to incorporate more air into the growing bed and then to avoid compaction by only walking in the walkways. 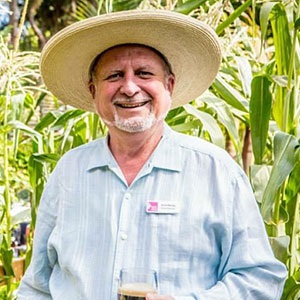 Scott Murray has 42 years of organic agricultural production experience in the United States and Mexico. He has a multitude of experience with conservation, food production, and environmental leadership—including serving as an elected California Conservation official for the last 22 years. Scott also specializes in farmland preservation projects utilizing Smart Growth Principles. He can be reached at scottamurray@sbcglobal.net.