by Guest blogger: Jason Johns
Responses to the Q&A from his Growing Berries presentation in our Daily Gardening Classes

From Janis:  Jason was our presenter for our 31st Daily Gardening Class on Growing Berries.  We were not able to have him present for a live Q&A, but as promised he quickly responded. The following are the questions submitted in that class and his answers.

Dena (Chandler, AZ): I just planted the blackberry bush and not sure if I should allow the berries to ripen or should I remove them since it is just planted.
Jason: Hi Dena, generally the advice is after moving any plant, remove the fruit/flowers in the first year to allow it to establish a strong root system. So yes, I would remove the fruit and flowers just for this first year to allow it to establish itself. Then prune it properly in the winter and you should get a great crop next year.
Monica (Flagstaff, AZ): Can blueberries be planted under Douglas fir, among holly shrubs?
Jason: Hi Monica, blueberries are one of the few plants that will grow under pine trees such as the Douglas fir. It will need to kept well watered and I’d recommend mulching it well and perhaps building up the soil where you are planting it. Watch out for competition from the holly shrubs in case they crowd out the blueberry. The blueberry will need a lot more food and water that if it was planted elsewhere because the fir will draw up a lot of this from the soil (hence raising up the soil). The holly bushes will also compete for resources. Make sure that the blueberry variety you buy doesn’t grow too big and start to grow into the fir tree.
Susan (Rio Verde, AZ): What is the best berry variety that can be container grown in Phoenix area and when to plant. My area can have as much sun as full day, or morning till midday or full late sun (if that’s good in winter months). We like all but mostly want for cereal and yogurt. Thanks
Jason: Hi Susan, Greg will be well positioned to advise on the best plants for the Phoenix area as I live in the UK where the climate is very different. Most plants will grow well in containers providing it is large enough to support them. For example, here I am growing strawberries in guttering on the wall, but in Phoenix, it would dry out too quickly and the plants would struggle. Dwarf blueberries, tumbling blackberries, strawberries, gooseberries, currants, smaller raspberries, cranberry, cape gooseberry and lingonberry would all grow in containers. All you would have to do is position them in the ideal location for each plant. 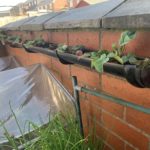 Mel: I have some strawberries starts. Just put in ground. There are some flowers and even a few fruit. Should I snip them out (so sad) until plant gets established? and #2, will it fruit later this year?
Jason: Hi Mel, it is best to remove the flowers as soon as you plant them to allow them plant to establish itself. Depending on where you are located, you may get a second crop in late summer. However, I will say that not everyone does remove the flowers and I have left them on before because I feel the same as you … it won’t kill the plant to leave them there, but you will have to give it a good feed and water.  Generally strawberry plants are replaced every 3-4 years anyway.
Jewell (Phoenix, AZ): Isn’t it too hot to try and plant strawberries now.
Jason: Hi Jewell, it probably is in Phoenix, though you may get away with it in a shady area. Here in the UK, it is the perfect time to plant them as it is just starting to warm up nicely. My strawberry plants have settled in well and are growing nicely, but it could well be too hot in Phoenix.
Kat (Glendale, AZ): how often to water blackberries when fruiting?
Jason: Hi Kat, whenever they dry out too much. If they are in containers, they will need watering more often. I’d recommend at least twice a week, but more if it is extremely hot. Check how dry the soil is but checking a couple of inches down to see how moist it is (either stick your finger in or use a trowel to move some earth).
Kat: What companion plants deter bugs?
Jason: Kat, that depends on which bugs you are trying to deter. Nasturtiums can be used as a trap crop for aphids while chives will deter them. Ladybugs can be attracted in your garden as their larvae eats aphids so plant alliums, geraniums, borage, calendula, cilantro, parsley or mint. I tend to plant some things to deter the pests and some things to attract predators which gives it a nice balance. I’ve written about this extensively in my book on Companion Planting.
Dena (Chandler, AZ): should I allow my new berry bush to produce berries or should I remove them for better root growth?
Jason: Hi Dena, generally the advice is to remove the fruit/flowers to allow the plant to establish itself in the first year but most of us are excited to see some sort of result. It won’t kill the plant if you leave them on there, but they may not be as good as they could be due to a weaker root system. I’d say leave some on and remove some so that you can at least get something from your berry plants this year.
Wael (Lebanon): Mulching is it essential for berries?
Jason: Hi Wael, mulching is not essential for berries, but it can be helpful to supress weeds around the base of your plants and to help keep moisture in the soil, ideal for hotter areas. Most of mine are mulched with some thick weed membrane and then 4-6 inches of bark chippings, which was what was available for free at the time. I have driven a 2 inch pipe into the ground at the base of each plant so I can water the rootball directly. This helps to retain moisture and reduce moisture loss from evaporation.
Harriette (Oakland, CA): I was given some currant and gooseberry cuttings. Unfortunately, I lost their labels and they look a lot alike. How do I tell them apart?
Jason: Hi Harriette, they are actually quite easy to tell apart. Firstly, the currant leaves, particularly blackcurrant, will have a slight smell of blackcurrant to them. 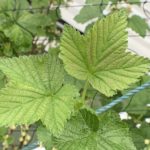 The above image shows some blackcurrant leaves, which are larger than gooseberries and have three sections. 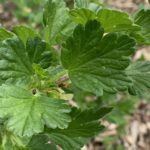 The above is gooseberry leaves, which while still have three sections, are much more crinkly around the edges and less defined.

Dena (Chandler): In PHX area should I have berry bushes in a protected are or keep them in full sun, or morning sun and afternoon shade area. Thx
Jason: Hi Dena, that depends on the berry bushes that you are growing and how much sun they appreciate, all of which is detailed in the Berry Gardening book. If you suffer from birds or other pests, then it can be worth netting your berries to keep them off so they are protected. Some of the berries will prefer the slightly shadier area. I’d say keep the more sun sensitive berries in the area that gets afternoon shade so they are protected during the hottest part of the day. Native berries and cultivars are more likely to appreciate the full sun location in your garden.
Dena (Chandler): How many times do we fertilize my berry bushes
Jason: Hi Dena, again, that does depend on the berry bush, but I would fertilize them at the start of the growing season and then give them a good mulch/feed at the end too. Depending on the quality of the soil, you may want to feed them a few times during the growing season too, probably every couple of weeks. Once they set fruit, move to a feed that is lower in nitrogen and higher in potassium and phosphorus as this will encourage the production of fruit and flowers. Nitrogen encourages excessive foliage growth and using a high nitrogen feed can result in a very green berry bush with little or no fruit.
Joyce (Reno, NV): Will a male mulberry tree produce fruit?
Jason: Hi Joyce, male mulberry trees will not produce fruit. Some mulberry trees bear both male and female flowers. Sometimes, just to make life more interesting, mulberry flowers can change sex halfway through the growing season! So oddly enough, a male tree may not always be a male tree! Male catkins will grow up to 2 inches longer whereas female catkins only grow to about 1” long and are wider than the male catkins. Male catkins also have a filament (slender, stem like growth) in them which is not present in female flowers.
Stephanie: Have you grown snowbank blackberries? I got some last season and they have exploded since I planted them in the ground this spring.
Jason: Hi Stephanie, I’ve not grown them myself as they are not very common here in the UK. I have just found some available via mail order and they are called “Polarberry”, which is kind of cool. Very tempted to order some of those and some golden raspberries, as I think they would pair really well together. Thanks for letting me know about it. 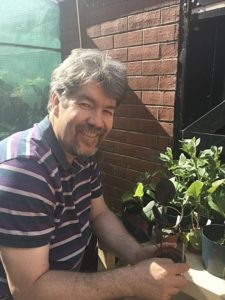 Jason is the author of Vertical Gardening: A Complete Guide to Growing Food, Herbs, and Flowers in Small Spaces, as well as 17 other gardening books on everything from greenhouse gardening to growing giant pumpkins. Jason is passionate about gardening, having grown his own produce for over twenty years.  He started with a second-hand greenhouse, an 8’ by 6’ patch of his mother’s garden, and far too many tomato plants.

How to reach Jason: