Are You Cooking Your Fruit Trees?

With the summer heat fully entrenched in the Valley of the Sun, it’s important to take a moment and discover the details of the micro-climates within our gardens and orchards.  Yes, there can be wide swings even within our own yards!

My new orange tree was struggling.

I had recently planted a Trovita orange tree, and was concerned as it was really struggling.  I had followed all of Greg’s planting instructions – the deep wide water well and regular waterings, about 8” of woody mulch beneath it, the trunk was wrapped with tree wrap – and yet it was sickly yellow and shedding leaves fast.  Suspecting the heat with the culprit, I grabbed my digital infrared thermometer (these have really come down in price lately, with decent models available for about $20).  I was shocked to be getting readings of 168 degrees around my poor tree.  This was on par with the temperature of the block wall fence nearby.
How can this be when the ‘official’ temperature in Phoenix at the time was only 101 degrees?  Isn’t mulch supposed to keep the ground cooler?

How far down was the heat going?

I did some further investigating:

What about other mediums?

My take away from this is that while the mulch is keeping the actual soil temperatures down, the surface of that mulch, when dry, can reflect as much heat as concrete.  My trees are on bubblers, and the bubblers are completely buried in mulch.  So it’s not enough for me to just water under the surface of the mulch. I need to add some water to the surface as well.  Not only will this help keep the mulch from warming up as quickly, it will help it break down faster as well.

I needed to cool that mulch.

My solution for my ailing Trovita was to add an additional layer of fresh (ie: wet) mulch underneath, as well as put up a shade cloth to give it some relief while it is getting established. I found a 13×7’ finished shade cloth at Costco for about $25.  I purchased a couple wooden tree stakes, eye screws, and carabiners.  I could have used the rope that came with the shade cloth, however, I opted to attach the cloth to the wooden tree stakes using the carabiners and eye screws so I could easily detach the cloth when a monsoon storm threatened.  I didn’t want it to become a giant sail that could come loose and cause damage to my trees (I’ve had it happen with a neighbors shade cloth came loose and got caught on a mature apricot tree in my yard and broke off half the tree during a storm!).  The carabiners give me quick release compared with trying to untie rope.  All told, the entire project cost just under $40. 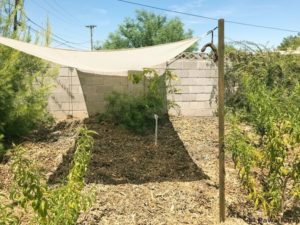 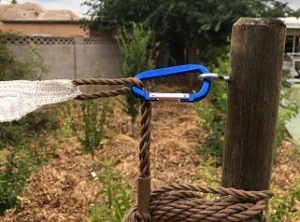 Now when I take the temperature under the shade cloth, I max out around 115. Additionally, until my trees grow and can self-shade, on days when the temperatures are forecast to soar, I’ll go out and moisten the top surface of the mulch. 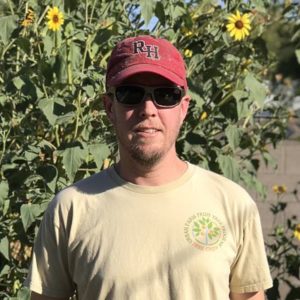 Ryan Hossler is a native of the Valley and has been growing for nearly four decades in our extreme climate. Some may recognize him from the Fruit Tree Nursery and many other Urban Farm programs. His current orchard and garden, 44 Paws Farm, is located in Central Phoenix, where he also manages a feral cat colony and their bountiful hybrids.