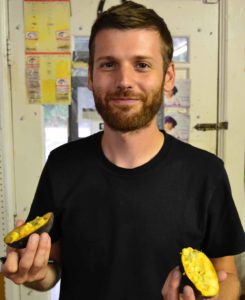 Andrew grew up in Lake Wales, Florida, just south of the pawpaw’s native range. He is a writer and gardener, and now lives in Pittsburgh, Pennsylvania.  His first book, Pawpaw, In Search of America’s Forgotten Fruit was published through Chelsea Green in 2015 as a hardback and this year in paperback.  It was also nominated for the James Beard Foundation Award..

Amazed upon being introduced to a delicious tropical fruit that grew in temperate areas of the Americas, Andrew Moore delved into some heavy research to learn more about it. He found that this fruit has been growing on the continent for a very long time, has a rich history with both ancient fauna and early human civilizations. He tells us some of what he learned and why it has been forgotten.

American Chestnut: The Life, Death, and Rebirth of a Perfect Tree

How to reach Andrew: