Way too many apples!!!

Step two in my apple processing adventure was to press apple juice (cider) which can be used for juice (no fermentation), hard cider or in our case apple wine.  For this process, you will need some method of extracting the juice from the apples and storage jars.  I use the 2 step process of crushing the apples in my Weston Apple and Fruit Crusher… 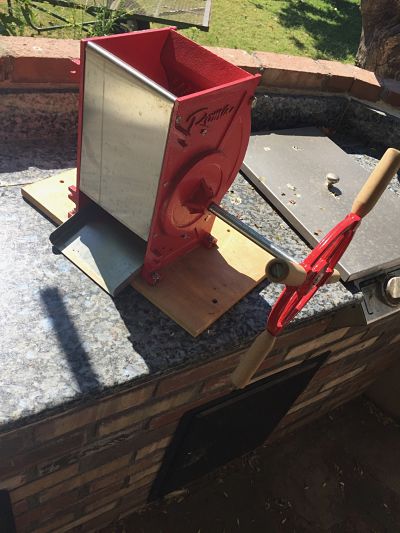 …and then pressing the juice out of them with my Harvest Fiesta Fruit Press: 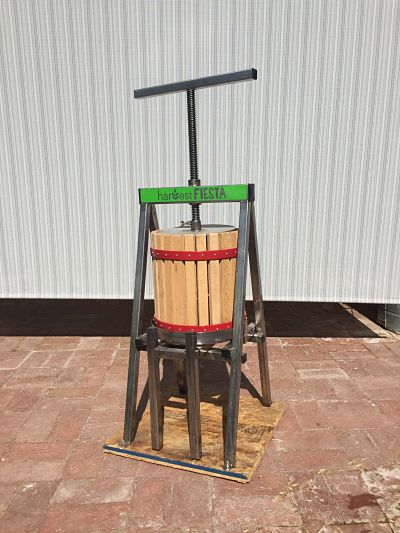 I know, between the two it is quite the investment, but these tools make all the difference in the world when processing large quantities of apples (or other fruit, for that matter). I have pressed both prickly pears and grapes in the same way, and the grapes do not require the fruit crusher like the apples do.
The apple crusher does a great job of chewing the apples into small chunks so that pressing process leaves the leftover very dry.  The process works like this:

With the leftover pulp (and we had a lot!), we fed some to the chickens, threw some to the worm bin, froze some for later feeding to the chickens and sent a bunch home with Cricket for dehydrating. Click here to read her post on making apple wine and learn what she did with the dehydrated apple pulp.
Step three of The Urban Farm apple saga was to dehydrate the apples into a yummy snack.  THIS is my favorite thing to do with them, and the dehydrations of my labor often last well into the next year.
For this you will need a tool to core the apples. This could be as simple as a kitchen knife or my favorite an apple corer that quickly slices and cores your bounty.  This is my favorite one: 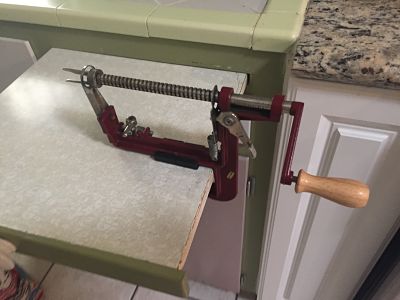 This is a very simple and fast process where we ‘plug’ an apple on the tongs and spin away.  Then we end up with a nicely cored and sliced apple, you can also peel the apple, but I like to leave the skins on because of the nutrients in them. 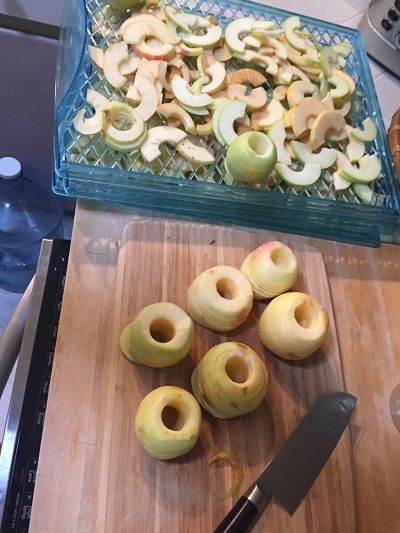 Plus you need way to dehydrate the sliced apples.  There are many of these available all the way from solar powered to completely automated.  I always make a lot of these as they make great portable snacks that last a very long time.  We slice the apples in half and spread them on the drying trays then dehydrate away. 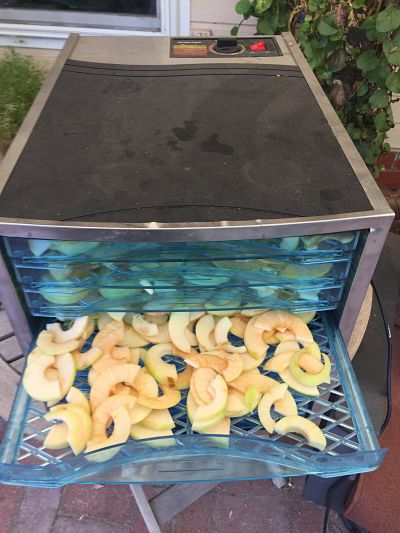 The, violà, we have a nice, nutrient dense, organic, we know what is in them, tasty snack that is easy to store. 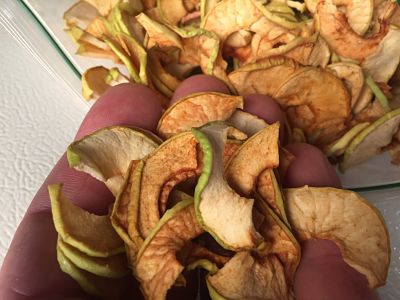 The moral of the story is to plan ahead for when you have the huge bounty.  That way, when it does arrive you have the tools and knowledge to handle it.  There is nothing worse than having a bounty and having it go bad on the vine or tree simply because you have not planned.

Greg Peterson is a green living and sustainability innovator who is well-known regionally. He has appeared extensively on local television and radio and is a frequent guest columnist for publications.  His mission is “inspire people to embrace their own greenness,” which he does daily by living what he speaks. He received his master’s degree in Urban and Environmental Planning (MUEP) in December 2006 from Arizona State University.

Join us for chats about gardening topics with Special Guests each month. Live Q&A to assist with your questions
Sign up for the series!
Categories: A Blog Article on, Cooking and Nutrition, Fruit Trees, Homesteading or FarmsteadingBy TaylerJuly 5, 2017Leave a comment