223: Paten Hughes on Heirloom:
Tomatoes and a Web Series. 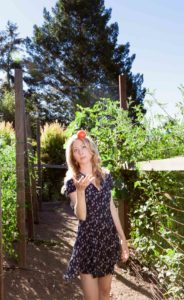 Paten is the star and co-creator of the hit digital series HEIRLOOM on Vimeo, written by Bekah Brunstetter (NBC’s This Is Us) and co-starring Margaret Colin, Tom Wopat, Pascale Armand, Ryan Cooper, and John Lavelle.
This semi-autobiographical web series follows the character Emily who gives up her struggling acting career in New York to move to California and farm heirloom tomatoes on a property she inherits.  Paten, who really moved to Northern California and become a first-time farmer, sells her juicy organic tomatoes to several local restaurants in Sonoma.  She is very committed to preserving nature, supporting local and organic farming.  The show’s flavor carries her pro-environment, sustainability, and organic preferences.

We get the inside scoop from actress Paten Hughes on the inspiration for her new web-series which is based on her transition of actor-to-tomato-farmer. She did not just plant a few, she planted more tomato plants than most people can even conceive and now she has several restaurants that order from her.

The Hours: A Novel

Letters to a Young Poet

How to reach Paten:

Join us for chats about gardening topics with Special Guests each month. Live Q&A to assist with your questions
Sign up for the series!
Categories: Homesteading or Farmsteading, podcast, SeedsBy JanisApril 18, 20174 Comments
Tags: HeirloomPaten HughespodcastThe Urban Farmtomatoes