A Blog Article on 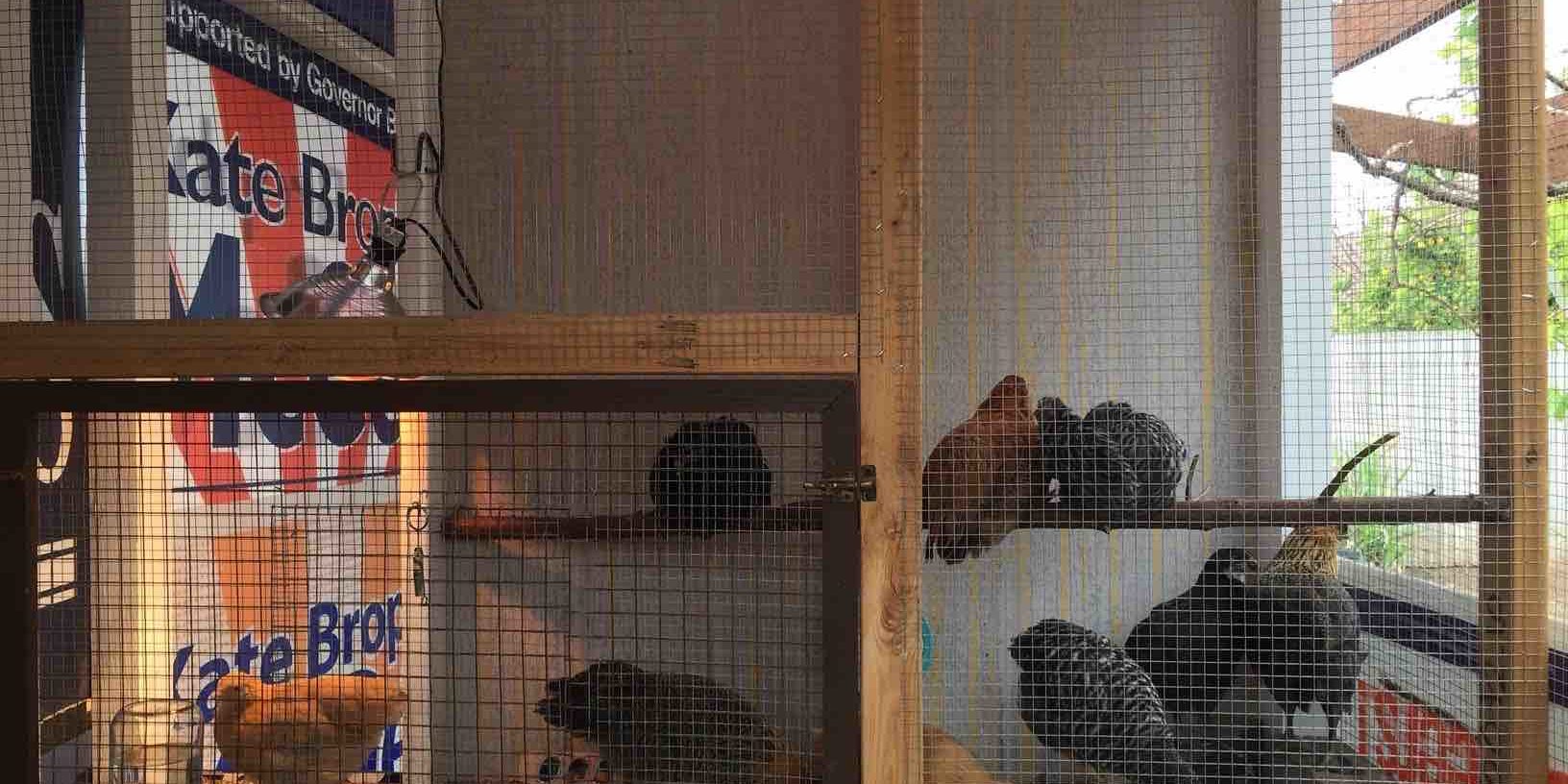 The New Urban Farm: Chicken Taj Mahal
Made with Politicians in Mind

I added my first flock of chickens to the Urban Farm in 1999 after almost two years of lamenting to my friend Robert, who finally got tired of listening to me so brought me 3 hens and said deal with it.  I learned quickly how easy and fun chickens are to keep.
Over the years I have had many different ‘houses’ for the hens and occasional rooster (don’t tell anyone). From using a standard 4’ x 8’ box with a roof and two sides (the one I had for more than a decade) to chicken tractors or just letting them actually roost in the trees, I never spent a lot of time thinking about how to build them a house. Until now…
Two things led to the decision to actually build an official chicken coop.  The first was that my sweetie Heidi and I decided to add more hens to our flock, so we needed a secure place for them to grow.  The problem this presented was that we now have a feral cat that lives here at the Urban Farm and she will take out any small bird including our new chicks.  In the past, I have raised chicks in a cardboard box then moved them to a run that was not secure.
The second relates to the cost of feed.  Without an enclosed chicken coop the chickens eat outside along with all the pigeons and other birds that gladly will show up by the hundreds to munch on our nice organic feed.  I even purchased a trundle feeder to solve this (it has a platform that the chickens have to stand on to open the feed door), but the pigeons figured out that if two or three of them landed on the platform the door would open and dinner would be served.
So the process began.  I am a big fan of reusing as many of the bits of cultural detritus as possible, so when I think of building a new chicken coop I naturally think of old political signs.  They make great siding and literally last for decades.  This little tidbit has not gone unnoticed as evidenced by this hilarious tidbit that ran in Phoenix Magazine right after the fall elections.  I especially like the part about me being the “Election Day pilot fish, nibbling dead bits of flesh off of the body politic.”  I cannot stop laughing about this one.

Anyway, I digress—back to the coop de Taj Mahal.  Step one was to determine the size and shape of the new digs.  We designed a 5’x9’ coop and during the process realized that we could actually make it 6 feet wide in the front, so we created a 1-foot-wide pop-out for the front part of the coop, which magically created an upper space to add a brooder.  So, within a few days in January we had the main structure, roof, walls and brooder installed and ready for chicks and chickens.

Until…we tried to fit in 10 hens onto the roosting bars and 10 rapidly-growing chicks into the brooder and we realized that we were going to quickly run out of room.  Above is the original coop and below the original brooder.

It quickly became clear that we needed to expand our chicken digs and do it now as the chicks were growing very quickly.  So, I hatched yet another plant to add another 5’x 8’ extension to the west side. With my buddies Forrest and Jeff we were able to bang it out in a mere 2 days.  This new extension will be the housing for the new chicks until they are old enough to be integrated into the main flock and not be hunted by our feral cat.
Take note that on the picture below we have removed a piece of the back wall of the brooder and added a bale of hay so the chickens have access to their brooder and the 40 square feet of ground space.  Once I integrate the new chicks into the flock to remove the brooder and wall between the two coops, my intent is to make it one large indoor coop, making my now almost-finished Coop de Taj Mahal almost 100 square feet.

We have plans for built-in nesting boxes and a new brooder area for next time we have to raise chicks.
Before we talk about the cost of feed, though, I want to share two other money saving tips that I use in my chicken area—a feeder and nesting boxes.
We were challenged with where in the coop to put the feeder.  There were two issues: how much ground space it takes up and the fact that chickens love to get in the feeder and spread food all over the place (thus wasting a LOT of it). So, we put on our brainstorming hat and decided to try using a metal gutter.  I cannot begin to tell you how happy I am with the value of this one.  Hens can’t get on top of it, plus it is outside of the floor space and is working well.  Total cost—about $10.  I plan on putting another one in the new section when we open it to all the hens.

Years ago I dreamed this one up and it is very easy and cheap!  I take two 15-gallon tree tubs and one piece of scrap wood and screw them together, add some hay to the bottom and voila! I have the perfect place for the hens to lay.

And for the cost of the feed: In Phoenix (and now Tucson) we participate in a local organic animal food co-op run by Scott Brown.  We love what he does. The feed is reasonably priced, comes in 50–pound bags and is manufactured by a small mill, unlike other organic feed that comes from ‘the big guys’ in 40 pound bags that are $5 more expensive.
Here is what I have noticed: two months into feeding our hens inside and not letting the other birds at the food, we are saving an extreme amount of food.  Last year we were spending $65 per month on feed; now it looks like we have at least cut that cost in half.  I don’t have specifics as of yet but as this process develops over the next few months I will be documenting it and letting you know.
As you can see, we take our hens very seriously here at the urban farm.  We love them because they eat a lot of our food scraps, fertilize and till our soil and provide a nice almost daily deposit of eggs to eat for breakfast and share with our community (the sharing often includes selling organic, free range eggs). I believe that if you have a backyard or even rooftop (in cooler climates than Phoenix) everyone should keep 3 or 4 hens…for the work they do and for the fun they bring into your life.