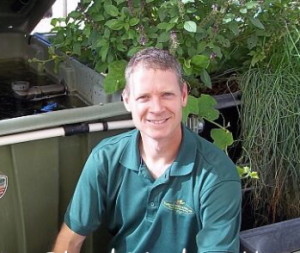 Chad Hudspeth holds a bachelor’s degree in business administration from Midwestern State University in Texas. He grew up on a dairy farm in north Texas and learned early on the true meaning of work and farming. He learned of aquaponics in 2008 and immediately began experimenting with different methods of growing fish and vegetables together. In 2012 he founded Endless Food Systems and began manufacturing a plug and play modular aquaponic kit that could be shipped to the lower 48 states. Chad regularly teaches aquaponic classes and has been on national television, several radio shows and featured in many magazines concerning aquaponics.